Blog Tour ~ Anything For Her by G J Minett

The locations that feature in Anything For Her

Everyone understands how important characters are and the crucial role they play in keeping a reader hooked. What is less widely recognised is the fact that locations can be equally important, almost characters in their own right. The chance to follow the action as it unfolds in familiar settings seems to add a little extra. Certainly, feedback from book groups and reviewers has been favourable so far about my choice of The Cotswolds for The Hidden Legacy and the Bognor/Chichester area for Lie In Wait.

With those two, I have to confess, I played it safe (euphemism for “I was really lazy”) and stuck to areas I already know really well but with Anything For Her I felt it was time to branch out a little and actually do some research. With that in mind, I came up with two separate locations and spent a few days there, familiarising myself with the layout and identifying specific landmarks. They were chosen as follows:

Rye had been in the back of my mind ever since I saw a TV production of Mapp and Lucia. I was taken with the cobbled streets and mistakenly thought it was the same setting as for Foyle’s War, which turned out to be Hastings. There was something slightly olde England about the town itself and during the three days I was there I got to know the area well and found myself adapting the original plan for the novel to take account of places I’d visited.

I stayed outside the town at a family run B&B called Point Farm on the outskirts of Camber, which of course brought Camber Sands into the equation. I remembered the awful tragedy of a few months earlier when five young men from the London area came down for the day and were caught unawares by the tides and when I went for a long walk along the beach it was almost impossible to imagine how such a thing could have occurred. Then, having walked out an amazing distance to get to the water at low tide, I turned round and found that it was starting to run in channels behind me and I had to wade back through some areas that were already ankle deep. Not long afterwards, the tide came in with a vengeance and it wasn’t too difficult then to appreciate how a non-swimmer might get into difficulties. The slight frisson of danger persuaded me that this setting could play a significant role in the novel.

As for Winchelsea, I’ll admit to a touch of whimsy there. A friend of mine is a Spike Milligan fan and had told me that on his gravestone were inscribed the words ‘I told you I was ill’. When I heard that he was actually buried in the churchyard in Winchelsea I was determined to find out whether this was true or just one of those urban myths. It took me ages to find the gravestone as four locals out walking their dogs were either unaware of where it was or were fed up with strangers asking them the same question every other day. When I did find it, the inscription was in Gaelic so I’m none the wiser, but I’d like to believe it anyway.

I knew I needed a location outside the UK and fancied that New England might be a possibility for no better reason than that my wife and I had always wanted to go there. It would be nice to think that my publishers were happy to sponsor it but I suspect they’re worried that if they go down that road my next novel will be set in Turks and Caicos. A self-financed research trip then, sometimes referred to as a holiday.

When we arrived in Portland, Maine the landlady of the B&B where we were staying (NOT Jeanie Alvares, I hasten to add – you’ll understand if you read the novel!) suggested strongly that we should visit Peak’s Island. We’re so pleased she did. A 15-minute ferry crossing drops you off at this idyllic setting of clapboard houses and homemade apple pie wholesomeness where motorised transport around the island is principally by golf buggy and every corner negotiated reveals amazing scenery. The locals are friendly and it’s almost like stepping back 50 years in time . . . and please don’t infer anything remotely patronising from that remark. I knew within minutes of arriving there that this was going to be the foreign setting for the novel and if you’re ever fortunate enough to travel to New England yourself, I’d strongly recommend a trip to Portland and Peak’s island. I only hope I’ve done it justice.

So, those were the locations for book 3. I’m just off to pack my bags for the Caribbean for book 4 . . . in case my publishers are reading this.

When Aimi tells him that she wants to escape her abusive husband, Billy agrees to help her fake her own death. But is she still the Aimi that Billy remembers from all those years ago?

Once Aimi disappears, Billy has to face the possibility that perhaps she had different reasons for disappearing - reasons that might be more dangerous than she's led him to believe . . .

Sometimes trusting the one you love is the wrong thing to do. 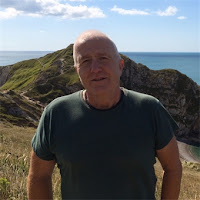 G.J. Minett studied at Cambridge and then spent many years as a teacher of foreign languages. He studied for an MA in Creative Writing at the University of Chichester, and won the 2010 Chapter One Prize for unpublished novels with the opening chapter of The Hidden Legacy.


Huge thanks to the author for spending time with us today and for sharing
this lovely guest post.