"Even though there was a war on, the Woolworths girls brought Christmas cheer to their customers"

Sarah, Maisie and Freda work together at the Erith branch of Woolworths and have formed a strong bond of friendship which has seen them through difficult times, however, their loyalty and camaraderie is about to be tested again in this difficult year of World War Two. With their loved ones caught up on the war, the girls must keep their morale high, even though, at times, they are caught up in the worry and uncertainty of not knowing what's going on with those they love.

The story very quickly involves the reader in the lives of this feisty group of women, and even though I haven't read the previous book, The Woolworth Girls, I very quickly picked up the nature of the story and enjoyed getting to know the different personalities. I think that the wartime feel of the novel sits nicely against the festive element and shows just how good people were at making the best of what was available.

The author writes with warmth and wit and creates an authentic war-time atmosphere, giving life to believable characters who linger long in the imagination. Becoming involved in their dramas and heartbreaks make this lovely novel an absolute joy to read.

I enjoyed spending Christmas at Woolworths with this group of women and hope to be able to catch up again with them in future sagas. 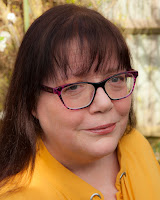 Elaine has written widely for women's magazines, with both short stories and features. When she isn't writing, Elaine runs The Write Place creative writing school in Dartford, Kent, and the blog for the Romantic Novelists' Association. Christmas at Woolworths is her third novel.


Elaine lives with her husband, Michael, and their Polish Lowland Sheepdog, Henry, in Swanley, Kent.