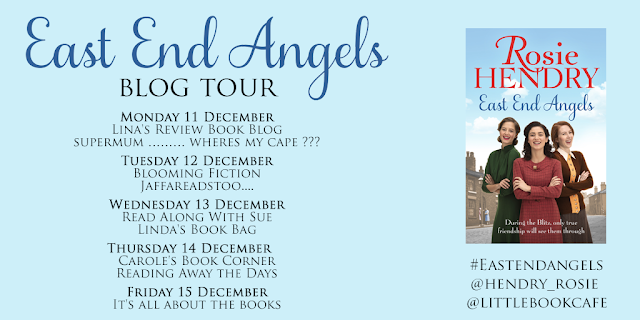 Meet The East End Angels, the newest members of Station Seventy-Five’s ambulance crew – when the war arrives, only true friendship will see them through.

Strong-willed Winnie loves being part of the crew at Station Seventy-Five but her parents are less than happy. She has managed to avoid their pleas to join the WRENS so far but when a tragedy hits too close to home she finds herself wondering if she’s cut out for this life after all.

Former housemaid Bella was forced to leave the place she loved when she lost it all and it’s taken her a while to find somewhere else to call home. She’s finally starting to build a new life but when the air raids begin, it seems she may have to start over once again.

East-Ender Frankie’s sense of loyalty keeps her tied to home so it’s not easy for her to stay focused at work. With her head and heart pulling in different directions, will she find the strength to come through for her friends when they need her the most?

Brought together at LAAS Station Seventy-Five in London’s East End during 1940, these three very different women soon realise that they’ll need each other if they’re to get through the days ahead. But can the ties of friendship, love and family all remain unbroken?

Winnie, Bella and Frankie are a feisty bunch of young women who work closely together as ambulance crew at the LAAS Station Seventy-Five in London’s East End. They are constantly called out to attend the devastation and destruction caused by the nightly bombing raids on London during the Blitz in 1940. The horror they witness on nightly basis bonds the group very firmly together and as they share the ups and downs of their lives so their friendship becomes stronger and stronger. Nicknamed the East End Angels, the ambulance team provide a vital service during this devastating time during WW2.

The separate lives of the three women come together in a lovely way, and even though Winnie, Bella and Frankie are all very different, it is in their shared experiences where the story starts to become really interesting. I didn't know anything about the London ambulance service during WW2, so it was fascinating to read this fictional account of what the crews faced on a regular basis and of the hardships they endured.

The author creates an authentic sense of time and place which really captures the uncertain war time mood. The deadly danger of trying to survive against all odds comes across as does the stoicism of the East Enders who tried to make the best of what life threw at them.The story flows nicely and amidst the gloom, there are some lovely light moments which add necessary light and shade.

And as the private lives of Winnie, Bella and Frankie start to mix with their working lives you can't help but form emotional bonds with  each of them. This trio of strong female protagonists are a lively bunch, they make you laugh out loud at some of their antics and yet, they also show huge compassionate and expertise in the most dire of circumstances.

Rosie Hendry lives by the sea in Norfolk with her husband and two children. East End Angels is the first book in her uplifting and heart-warming saga series that follows the lives and loves of Winnie, Frankie and Bella, who all work for the London Auxiliary Ambulance Service (LAAS) during the Blitz. Listening to her father’s tales of life during the Second World War sparked Rosie’s interest in this period and she loves researching further, searching out gems of real life events which inspire her writing.