Blog Tour ~ To Kill The President by Sam Bourne


Jaffareadstoo is thrilled to be hosting today's stop on the


To Kill The President Blog Tour

If a president is out of control, who will take the ultimate step?

Maggie Costello is back to uncover an assassination plot against the US’s tyrannical new president, facing the ultimate moral dilemma.

The unthinkable has happened. The United States has elected a volatile demagogue as president, backed by his ruthless chief strategist, Crawford ‘Mac’ McNamara. When a war of words with the North Korean regime spirals out of control and the President comes perilously close to launching a nuclear attack, it's clear someone has to act, or the world will be reduced to ashes.

Soon Maggie Costello, a seasoned Washington operator and stubbornly principled, discovers an inside plot to kill the President – and faces the ultimate moral dilemma. Should she save the president and leave the free world at the mercy of an increasingly crazed would-be tyrant – or commit treason against her Commander in Chief and risk plunging the country into a civil war?

I am excited to welcome the author, Sam Bourne to Jaffareadstoo

As the title suggests, the book is about a US president, and US politics. There is a lot of fodder for a novel in current affairs, so why this particular focus?

I’ve been covering US politics as a journalist since the 1990s – and I’ve found it compelling for even longer than that. In recent months, I think the world has seen that politics in America can be lurid, wild, tense and extraordinarily dramatic. It can also be frightening to watch - but it’s ideal as a setting for a thriller that aims to be packed with suspense.

Is it easy to detach yourself enough from current politics to write a political thriller? Or is it a struggle to separate fact from fiction?

I don’t find it a struggle. On the contrary, I find the real world fuels and feeds the fiction. It constantly prompts me to ask: what if?

Is there a pattern to your writing day?

I always plan to start early, but rarely do. Admin and emails tend to get in the way. It can take me till 11am to really get going, but once I’ve started I like to dig in for a long session: it can be three or fours before I stop and eat a late lunch. Then I go back at it until the early evening. I try to hit a target word-count for the day – but that target shifts.

Who would play the President on the big screen? And Crawford ‘Mac’ McNamara?

The President is rarely seen in this novel: he’s off-stage for most of it. Still, I could see Jon Voight in that role. Meanwhile, 'Mac’ would be a really juicy part for someone. I could see Brendon Gleeson playing him brilliantly. Or Jeff Bridges would also be brilliant.

Who would you invite to your ideal dinner party?

What’s next for Sam Bourne, are there any future book ideas you can talk about?

An idea is beginning to take root. But far too early to talk about…

Sam Bourne is the pseudonym of award-winning journalist and broadcaster Jonathan Freedland, who writes a weekly column for the Guardian and is the presenter of BBC Radio 4’s contemporary history series, The Long View. He served for four years as the Guardian’s Washington correspondent, covered the 2016 US election campaign and is a widely respected commentator on American affairs. His previous six internationally bestselling novels have sold over 2 million copies and been published in over 30 languages.

Discover more about the author on his website by clicking here 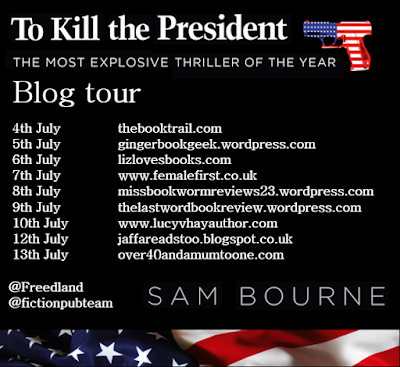 My thanks to the author for  input today and also to Emilie at Harper Collins for her help in facilitating this interview.