Blog Tour ~ The A-Z of Everything by Debbie Johnson

P is for Paris where it all began. J is for Jealousy where it all came undone. But the most important letter is F. F is for Forgiveness, the hardest of all.

Sisters Poppy and Rose used to be as close as two sisters could be, but it’s been over a decade since they last spoke. Until they both receive a call that tells them their mother has gone – without ever having the chance to see her daughters reunited.

Andrea, though, wasn’t the kind of woman to let a little thing like death stand in the way of her plans. Knowing her daughters better than they know themselves, she has left behind one very special last gift – the A-Z of Everything

When their mother dies, Poppy and Rose need to come together, not just to grieve the loss of the mother they both adored, but also to set aside differences which have seen the sisters estranged for the last ten or so years. Andrea has loved her daughters to the exclusion of everything else and this love is not lessened by her death, so in order to bring the sisters closer, Andrea, cleverly and rather poignantly, in the days before her death and with the help of her friend, Lewis, devised an A- Z of thought provoking tasks, which must be completed by Poppy and Rose in the days after the funeral,with, one hopes, enlightening consequences.

Losing a parent is never easy and the author's sensitive portrayal of all the different emotions expressed during such a sad time is done in a really thought provoking way. Each sister copes in their own inimitable style but it is when the two women finally come together where the story really starts to come alive.

I really enjoyed travelling through the alphabet with Poppy and Rose. The trials and tribulations they meet along the way really help to make this story such  a joy to read. I enjoyed The A-Z  of Everything written as it is with this author's remarkable skill for always getting right into the very heart of what makes people tick. There's a genuine warmth to the story but also a realistic warning that we must never take life for granted and in the overall scheme of things it's always better to settle differences rather than let them fester and niggle away for too many years.

The A-Z of Everything is Debbie Johnson writing at her absolute best and it's definitely one of my favourite stories this year. 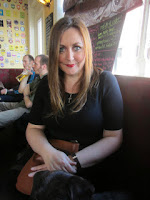 Debbie Johnson is a best-selling author who lives and works in Liverpool, where she divides her time between writing, caring for a small tribe of children and animals, and not doing the housework.
She worked as a journalist for many years, until she decided it would be more fun to make up her own stories than to tell other people’s. After trying her hand at pretty much every genre of writing other than Westerns and spy dramas, she has settled on women’s fiction that seems to make people laugh and make people cry, often at the same time.

Her books include The Birthday That Changed Everything, Pippa’s Cornish Dream, and Summer at the Comfort Food Cafe, all published by HarperCollins. She also ghost-wrote model and presenter Abbey Clancy’s debut novel, Remember My Name. 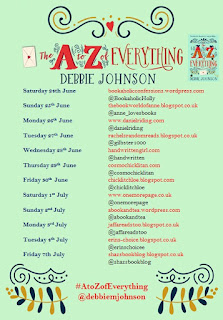 My thanks to the author and also to Felicity at Harper Collins for the invitation to be part of this blog tour and for my review copy of The A-Z of Everything.