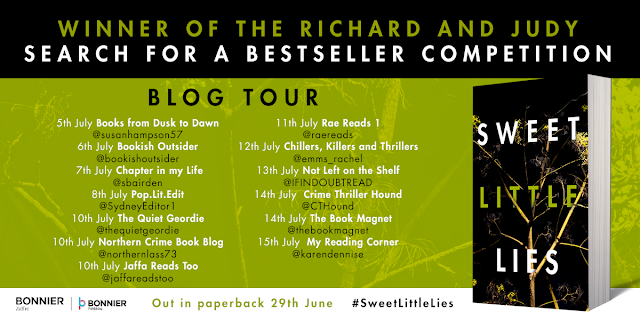 In March 2016, the couple behind Britain's biggest Book Club, Richard and Judy, launched the Search for a Bestseller competition, offering a two-book world rights publishing contract with Bonnier Zaffre, worth £50,000, representation from literary agency Furniss Lawton, and the book will be stocked in WH Smith stores across the country.

Bonnier Zaffre is delighted to announce the winner of the competition is Caz Frear, whose debut novel Sweet Little Lies was published on the 29th June 2017.


Cat Kinsella was always a daddy's girl. Until the summer of 1998 when she sees her father flirting with seventeen-year-old Maryanne Doyle.

When Maryanne later disappears and Cat's father denies ever knowing her, Cat's relationship with him is changed forever.

Eighteen years later, Cat is now a Detective Constable with the Met. Called to the scene of a murder in Islington, she discovers a woman's body: Alice Lapaine has been found strangled, not far from the pub that Cat's father runs.

When evidence links Alice to the still missing Maryanne, all Cat's fears about her father resurface. Could he really be a killer? Determined to confront the past and find out what really happened to Maryanne all those years ago, Cat begins to dig into the case. But the problem with looking into the past is that sometimes you might not like what you find.

For fans of Erin Kelly and Belinda Bauer, Sweet Little Lies is a suspenseful page-turner from a talented new voice.

I always have a feeling of excitement when a story by a new talent emerges and I suspect that this author's first book, Sweet Little Lies will be just the start of many more exciting reads.

The book gets off to something of a slow start which I suspect is entirely deliberate as it allows the story to develop at its own pace. Told in two separate timelines, that of 1998, and also in the present time, a story emerges which is entirely plausible and more than  a little disconcerting.

In the present, Cat takes her job as a Detective Constable in the Met very seriously, so when links to a murder point towards something which happened in her past, well....it opens up a whole new set of questions, for which there are always going to be a myriad answers.

Overall, I thought that the story worked well, there were enough twists and turns in the story to keep me guessing and I liked the way the story intertwined two separate strands, bringing everything together in a worthy conclusion.

An interesting debut novel and a worthy winner of Search for a Bestseller. 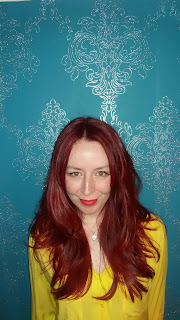 Imposter Syndrome – when can you call yourself a writer?

Recently, I went to get new glasses and while I was sitting there wearing the designed-to-make-you-feel-ridiculous eye-test specs, the optometrist suddenly asked me, “So what do you do for a living then?”  Initially, I thought he was just making some designed-to-make-you-feel-less-ridiculous chit-chat, but of course it was an important question.  He needed to know how hard my eyes were forced to work on a daily basis.

Even as I sit here writing about writing, I’m riding out a wave of ‘Imposter Syndrome’ - commonly known as feeling like you don’t quite belong in the world you’re inhabiting.  It’s rife in the writing world apparently.  Several successful authors have warned me that I’ll probably feel it for ages, it’s almost a rite of passage for newbies.  The thing is, it’s not an unpleasant feeling, as such.  The crime fiction community are an incredibly welcoming bunch and I’m thoroughly enjoying every fangirl moment - standing at bars next to authors I’ve loved for years, being introduced to amazing people who’ve ‘heard all about you’ - it’s all nothing short of remarkable, trust me.  But still, I can’t help but wonder at what point I’ll start to feel like one of ‘them’, not ‘little ol’me’…..

I really started mulling this over recently when I was asked by the wonderful Donna Freed from Radio Gorgeous, “So tell me, do you feel like a writer now?”  I won’t lie, I was a bit thrown by the question.  In fact, I wasn’t at all sure how I should answer it.  Because given I spend about 80% of my waking hours writing, and given I have a published novel and a contract to write another two, it seemed a bit disingenuous to answer with a resounding, ‘No’ but it’s true, I don’t feel like a writer.  I still feel like someone who’s trying to write some stuff that people might kind of enjoy, but I don’t consider myself ‘one of them’.  Not yet.  And isn’t that just absolutely ridiculous of me?

So in order to give myself a kick up the rear, I’ve written my own checklist designed to make me not just embrace the term, ‘writer’, but bloody well own it.  Here goes…

Do I write every single day?
Yes.  I certainly write something every single day, even if it’s just a 100-word chapter sketch or a couple of lines of dialogue.  Most days I write far, far more than that.

Do I turn down social events so I can stay home and write?
Yes, all the time.  I regularly dip out of real life altogether and hot-house myself for days.

Have I got up in the middle of the night to write?
Yes.  After one too many, “I’ll make a note of this in the morning” mishaps, I get up and switch the light on as soon as enlightenment hits.  Tip - you never remember your 2am ideas at 8am, no matter how great they were.

Have I got out of the bath to write?
Yes.  50% of my baths are interrupted by writing inspiration.  What is it with water and creativity?

Do I carry a notebook?
Yes, always.

Do I actually write in said notebook?
Yes. Snippets of Sweet Little Lies were scrawled in notebooks long before they ever reached my laptop screen.

Does my love of writing define me?
Yes.  Every choice I make is governed by the question, “So what does this mean for my writing?”