Blog Tour ~ The Importance of Being Me by Caroline Grace Cassidy

The Importance of Being Me Blog Tour 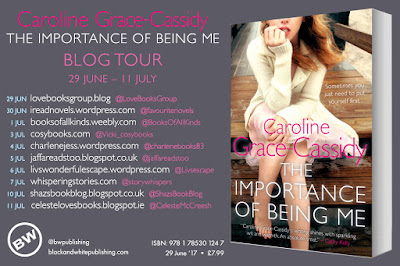 When Courtney’s husband David leaves her for Mar-nee – a local beautician years younger – she’s upset but nowhere near as devastated as she thought she’d be. Their marriage hasn’t been great for a long time. Now that he’s gone, Courtney and her fifteen-year-old daughter, Susan, are left on their own. But Susan is a complete daddy’s girl and likes to spend all her weekends with David and Mar-nee. Susan still thinks David is the greatest father on earth and Courtney has no intention of ruining that illusion for her daughter. To add insult to injury, Susan and Mar-nee have a fantastic relationship, happily snap chatting away their every waking moments.

When Susan decides to spend the whole summer with her dad and Mar-nee, Courtney is devastated. She needs a change, and some time for herself. A run-down cottage in Cornwall looks like the perfect solution. At least for the summer it’s a new location, new people and a project to keep her busy. When she bumps into a client she’s worked with but never actually met, it’s like being hit by a bolt of lightning. . . But can she ever have what she wants most in the world, a whole new relationship.

Thirty-something, Courtney is at a crossroads in her life, her daughter prefers to spend time with her father and his new, much younger, wife, leaving Courtney holding desperately onto a life that seems to be shattering into pieces. Making the momentous decision to change her life, Courtney moves to Cornwall in the hope that a new place, with new people ,will encourage her to take back control of her life.

In a way this is an adult coming of age story, which goes to show that we are never too old to start again, to make new friends, or to see new places and reinvent ourselves for a whole new chapter in our lives. The author has captured this time very well, the air of indecision , the upset of finding your husband with a younger wife, and the perceived desertion by a much loved child into a lifestyle over which you have no control.

The author writes well and imbues a real sense of character so that the people who flit into and out of the story feel genuinely authentic, with real feelings and emotions. True, it must be said, that I liked some characters more than others but that's what so important about good storytelling, that the characters come alive, with all their faults and failings right before your eyes.

I really enjoyed this story about the value of friendship, it's about finding new challenges but more importantly its about being kind to yourself and recognising that we all need to, at times, realise The Importance of Being Me.

It's definitely one of those stories to lose yourself in over an afternoon in the garden, or tucked away in the window seat of a country house, preferably with cake and tea... 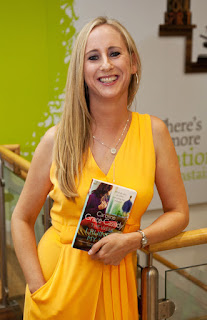 Caroline Grace-Cassidy is an Irish writer and actress. She trained as an actress at the Gaiety School of Acting before landing her first role as Mary Mull on BAFTA award-winning children’s programme Custer’s Last Stand-Up. Since then she has appeared in various productions for BBC, RTE, TG4 and TV3, alongside a variety of feature films. Turning to full-time writing in 2011, Caroline has published four novels. Caroline is also a founding member of an all-female Film & TV Production Company, for which she has written, produced and directed five short films. Her first feature film script is completed and in development. Caroline is a contributor for Woman’s Way, U Magazine, Irish Country Magazine and has been a regular panellist for the Midday show on TV3 since 2012

My thanks to Lina at Black & White Publishing for the opportunity to be part of this blog tour.