CHERRINGHAM - The Cosy Crime Series That Gives You a New Case Every Month‏...

I am delighted to bring to the blog

Co -authors of the Cherringham Mysteries 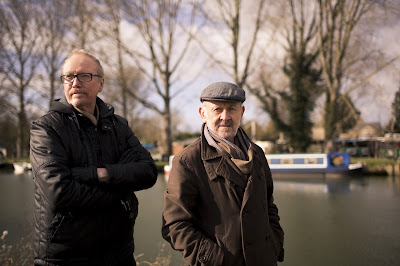 Authors Neil Richards (based in the UK) and Matthew Costello (based in the US), have been writing together since the mid 90’s, creating content and working on projects for the BBC, Disney Channel, Sony, ABC, Eidos, Nintendo to name but a few.

Their transatlantic collaboration has underpinned scores of TV drama scripts, computer games, radio shows, and - most recently - the successful crime fiction series Cherringham. Now into its second season of 12 novellas, Cherringham is popular around the world, having sold over 65,000 copies and has been adapted as a series of audiobooks in Germany. Neil and Matthew are both available for interview.

I'm thrilled that Matthew and Neil have taken time out of their busy schedules to answer a few of my questions...

Matthew and Neil welcome to both of you - it's a real treat to have your company...

*What can you tell us about Matt Costello and Neil Richards? How did you both meet and what made you decide to write in collaboration?


We met while mentoring at various media labs for BBC and other media companies worldwide. We enjoyed doing that together, and soon started, quite naturally, creating ideas for TV, shows, games, and books…all of which we went on to create and write.


*The Cherringham crime series is written as a series of episodic novellas, how do you determine who writes what, and how do you share ideas and construct the stories?

Initially, we focus on the crime…then slowly let details, twists, characters and settings emerge. Since we will be passing the story back and forth, we keep the outline pretty detailed, though sometimes…characters will surprise us. One of us will start, do the first few chapters, then pass to the other…and we each do an initial edit of the other’s work. And happily for our little village, the process has worked.


*Location is obviously very important to your writing. Have you visited any the places you describe so vividly?


Matt: We have! To start the series, we rented a cottage in a Cotswold location that must remain nameless. But staying there, one of us British, the other American, helped us replicate the dynamic between Jack, Sarah…and all the residents of Cherringham. And the locale itself suggested so many plot ideas!

Neil: I have family and friends living in the Cotswolds – and I lived there too for a while. So I feel very much at home in the area. Our Cherringham is very real to us – we have a map with all the pubs, restaurants, families… victims – and murderers!


*What is your perfect writing day and do either of you have any writing rituals?


Matt: A perfect day is one where the writing flows, moving me -- and then there is no better job. That day starts with a morning run, thinking of pages to come. It ends with those pages done…and with luck, even I am impressed. Then, onto cooking an amazing meal, and preparing the evening martini.

Neil: Like Matt it’s a day when the words just come easy and I lose myself in the world of the story. I try and get to my desk by 8.30 and will write through until late afternoon. I prefer my run at the end of the day – and I use it to think through story for the next day. Often I’ll come up with some edits – so I’ll hit my desk again to make the changes. Then – like Matt I’m the cook in this house – it’s getting dinner ready and enjoying that first gin and tonic… You can guess – I’m the English one!


*What do you hope readers will take away from the Cherringham crime series?

Primarily, a love of the characters. That they feel they know Jack and Sarah…and also the rest of our ‘cast’. Having done so many of these episodes, I have real feeling for all of them, and Cherringham itself seems so real as well! And lastly, we hope the reader feels we honored the traditions of the well-crafted and gripping mystery story.

Full length Cherringham Novels! With the first one out this summer and at least two more to follow. Neil and I are also working on a darker series of books…these will be anything but cozy! (But great fun, we hope!)

Nothing ever happens in the small Cotswold village of Cherringham, making it the perfect place to retire to – or so ex-NYPD Detective Jack Brennan thought. But before long, local web designer and single mother Sarah Edwards had convinced him to help her investigate a suspicious suicide. Since then, he and Sarah have solved mysterious deaths, unlikely accidents and perplexing robberies. “Peace and quiet” never really suited Jack anyway…

Cherringham is an ongoing “cosy crime” eBook series, that launched in December 2013 and features unlikely sleuthing duo Sarah and Jack. Released in monthly episodes, it is written by award-winning game and TV writers UK-based Neil Richards and US-based Matthew Costello in a transatlantic collaboration – which mirrors that of Jack and Sarah. The new series, released from March 2015, launched with A Lesson in Murder, in which the two are asked to investigate the violent death of a popular teacher at Cherringham Girls School.

Huge thanks to Neil and Matthew for being such delightful guests 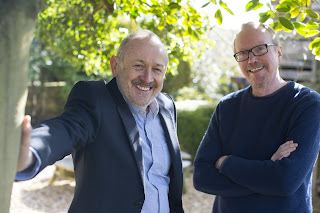 My thanks to Sophie Goodfellow at ED public relations for her help with this interview.

and for introducing me to the Cherringham Mysteries.