Blog Tour ~ The Last Thing I Remember by Deborah Bee

Jaffareadstoo is thrilled to be  hosting today's stop on the

The Last Thing I Remember 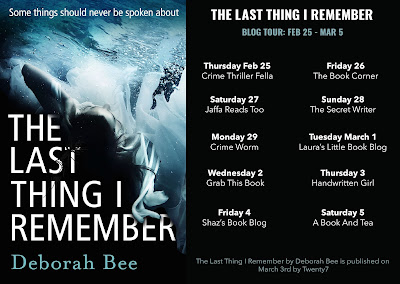 Imagine waking up and being unable to move, unable to see, unable to communicate. Your past is a blank piece of paper and you don’t even know your own name. But you can hear. And the only way to piece together your life is to listen to the people around you…

The Last Thing I Remember...

I think it all started with Betrayal, by Harold Pinter that I saw in Covent Garden. The story is told backwards. The play begins with a couple who are separating. They’ve been having an affair for years. The next scene is earlier; they look younger and are still in the throes of the relationship. Each scene goes backwards until in the final scene, we see how they met. It’s a great twist at the end. Not what I was expecting at all.

My story starts with a coma victim, Sarah, with Locked In syndrome. She is brought into hospital after an apparent mugging. She has no memory. She can’t move, see, blink, breathe on her own. But she can hear. So she is piecing her life together through what her family and the medical team are saying. As she begins to remember her childhood, the reader is taken back in time to discover who Sarah is and how her experiences have shaped her personality and brought her to this point.

The other thing I love about Betrayal is how Pinter plays with our sympathy. Each scene casts a different character as the baddy and the victim. By the end of the play you’ve felt alternately sorry for/angry with the couple having the affair, and their spouses. I tried to bring some of that idea to The Last Thing I Remember. I wanted to misdirect the readers through the unreliable evidence presented by Sarah, through lack of memory or understanding and Kelly, her fourteen year old next door neighbour.

Nora Ephron’s Heartburn is always by my bed for a quick dose of inspiration. The group therapy I stole from her. In her version her heroine, Rachel, gets followed to her group by a thief who steals the diamond ring that she had been given by her husband. When she gets the ring back and takes it to the jewelers to get it mended, she discovers her husband has bought a diamond necklace for someone else, the woman he is having an affair with. It is so brilliantly funny while being heartbreakingly sad.

My heroine, Sarah, is in a heartbreakingly sad situation. Her doctors are doubtful. Her family is desperate. So I introduced an antidote to Sarah, Kelly – a second protagonist who is loud and funny, foul-mouthed (very) and sassy. I alternated the narration chapter by chapter. That dual narrative structure allowed Sarah to reveal things about Kelly that Kelly would never say. And vice versa. And it relieved the tension that Sarah’s situation created.

Gone Girl came at a good time for me. I was really unsure of the dual narrative structure because everyone advises against it. It was so successful in Gone Girl that I had the confidence to keep going.

Deborah Bee studied fashion journalism at Central St Martins. She has worked at various magazines and newspapers including Vogue, Cosmopolitan, The Times and the Guardian as a writer, a fashion editor and later an editor. Currently, she is a Creative Director in luxury retail. 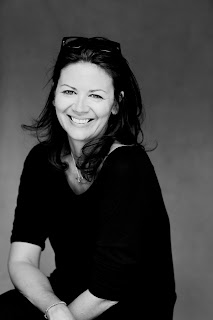 Do visit the other stops on the blog tour which runs between February 25th and March 5th 2016.

Huge thanks to the author for sharing her inspiration for The Last Thing I Remember and also to Hannah at Midas PR for her invitation to join this blog tour.