Blog Tour ~ A guest post by Janet Ellis, author of The Butcher's Hook..

Jaffareadstoo is delighted to welcome you to the first stop on 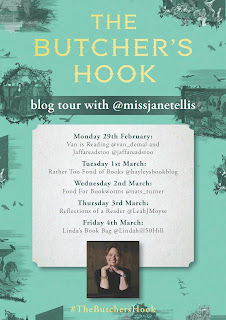 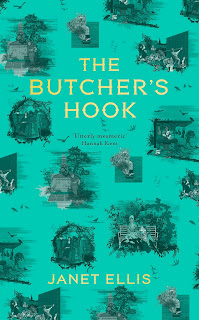 Janet ~ a huge welcome to Jaffareadstoo and thank you for sharing your thoughts about keeping a diary and your inspiration for your novel, The Butcher's Hook...


When I was nine, I started keeping a diary. Using those tiny (they measure about three inches by four)  Letts page-a -day journals , I faithfully recorded my doings and thoughts. For years, as I moved house, I packed the little volumes up without opening them. About twenty years ago, contributing to Danny Baker's radio show, the subject of diaries came up. I mentioned mine and, in the way of these things, Danny suggested I read some extracts aloud. For a few weeks I opened their pages at random and offered my young self up to public edification. My first thought was- I was rather priggish. Secondly, I was massively self-absorbed. I was a young teenager in the Seventies. Quite large events were happening on the world stage and closer to home- the Beatles broke up, we went decimal, terrorists attacked the Munich Olympics, that sort of thing. They mostly passed my teenage self by. We might have had troops in Northern Ireland, I was more concerned with whether Helen Copp would turn up to choir practice. We might have won the World Cup - but would Upper Sixth Greg fancy me?

Reading more diaries over the years - it's a form that's always fascinated me, with its  'is this for history and for me?' stance, I realised that I often wasn't alone in this solipsistic attitude. Most people are concerned with living their lives, getting through things and recording the prosaic. History is what happens when you look back- as you write your diary it's just daily life. Some notable diarists have, of course, coloured in our knowledge of past times with their vivid accounts of political and social events. And in the course of my research, I was very grateful to them. But I'm just as indebted to the ordinary note-takers, the letter writers and list-makers who had no idea that what they wrote would be held to any account. I drew on their domestic doings with glee.

While I love stories set in times gone by, when I started writing The Butcher's Hook I had two objectives - aside from those concerned with characters and plot. I wanted Georgian London as a backdrop, not centre stage ( the people I imagined were not at the mercy of great historical events) and I wanted to flesh out my (hardly original ) certainty that, despite their world looking, sounding and indeed smelling different from ours, they felt the same. All the big emotions -like  love, hate, greed, sorrow and the rest- and all the small ones, too -such as irritation or laziness-  haven't changed over the years.

That's where my diaries came in useful. Granted, I chose a year - 1763- where nothing much did happen (I didn't want to spoil anyone's enjoyment of the story with neglecting to mention a big battle or without anyone dying of a virulent, widespread illness) but I wanted Anne to navigate her path without commenting on the bigger picture. Just as Janet Michell Ellis did. And in that respect - but obviously in NO other, we're very alike!


Janet Ellis trained as an actress at the Central School of Speech and Drama. She is best known for presenting Blue Peter and contributes to numerous radio and TV programmes.

She recently graduated from the Curtis Brown creative writing school. The Butcher's Hook is her first novel.


Huge thanks to Janet for her kind invitation to join her blog tour and for giving us such a fascinating insight into her inspiration for The Butcher's Hook.

I'm in great company with Vanisreading today where you can read a Q&A with Janet Ellis.