Blog Tour ...What You Don't Know by JoAnn Chaney

Jaffareadstoo is delighted to be taking part in the

What You Don't Know Blog Tour 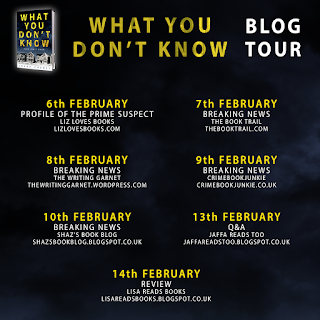 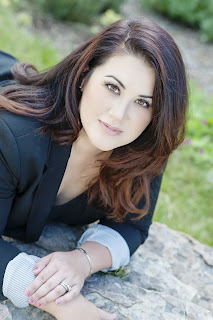 Hello JoAnn and thank you for spending time with us on your blog  tour...

Where did you get the first flash of inspiration for What You Don’t Know?

My first inspiration came when I saw an article about Jerry Sandusky—an American child molester. The article was actually about his wife, and asked whether or not she’d actually known about the crimes her husband was committing against kids, and if she had, why she’d kept the secret for so long. This article was the seed that grew into WHAT YOU DON’T KNOW.

As a writer, I’ve always been fascinated with the idea that everyone keeps secrets. From each other, and for each other, and even the lies they tell themselves. These are all reoccurring themes that occur in my writing.

WHAT YOU DON’T KNOW is about the years following a serial killer’s arrest and is told by three people who were each connected to the murderer: the killer’s wife, the detective who broke the case, and the reporter who covered it for the paper. The story begins when a copycat murderer begins operating, and they are all once again drawn together to relive the old nightmare.

Where do you get your inspiration from – are you inspired by people, places or do you draw purely from your imagination?

I’d have to say that it’s a combination of all three. WHAT YOU DON’T KNOW is set in Denver, where I’ve lived previously, and there are specific locations and businesses that I mention in the book. I’ve read books that happen in locations I recognize, places I’ve been—and it’s a huge thrill. It gives the reader a personal window into the story, and I love inviting readers in like that.

I also love to people-watch—it’s one of my favorite things to do when I have a chance. I work in retail, so I’m with people all day, and I’ll sometimes take notes on the little quirks and habits I notice from customers that I will later work into my characters. I’d also say that I’m inspired by the news—I spend a huge amount of time online, catching up on headlines and social media, and I’ve found that truth is often stranger than fiction, and usually makes for great stories.

This question makes me laugh, and here’s why: I’m not a plotter at all, but my editors are trying to shape me into one.

This is my normal writing routine: I’ll sit down with an idea and just write, without any idea of where it’ll go. This is the fun part of the writing for me, the best part. Just the writing, pure and simple, without any worry about where the story is heading. But this sort of free-form writing causes issues, and leaves plot holes a mile wide. And since I tend to write stories with lots of characters with intricate backstories doing complicated things, I really should plot so I don’t have to do extensive rewrites.

For WHAT YOU DON’T KNOW, there were plenty of plotlines that didn’t make sense with the first draft, so I ended up rewriting it three or four times over the course of a year. I have all the extra stuff that didn’t make final cut saved in a document, hidden away where no one will ever see it—it’s about 200,000 extra words that’ll never see the light of day. I feel a little ill just saying that.

For the book I’m working on now, I’ve written a pretty detailed outline to follow as I write, but it’s not working out as well planned. Instead, I tend to go off in different directions with the plot as I write, which then screws the whole thing up, and then the outline has to be rewritten. And my editors have asked me not to write until I have a solid outline, and I end up sending emails that say things like CAN’T STOP WON’T STOP as a joke although I’m completely serious. I’m like an addict who can’t back away from the keyboard.

If my editors are reading this, I’m sorry. I’m trying to become a plotter, I swear.


What were the challenges you faced whilst writing this novel?

Besides my issues with plotting, my writing challenge is always this: time management. I hold a full-time job, I have three kids and a husband; I have a lot of things going on. I always have to carve out time to write—sometimes it’s during my lunch break, or late at night after everyone is in bed, but it’s always in those odd moments when not a lot is going on.

I ended up doing a lot of research on serial killers for this novel—obviously John Wayne Gacy, and Ted Bundy—and I was surprised to learn that these were men people liked, they were respected, they seemed to be normally functioning members of society. If you’d met these men on the street, you wouldn’t have had a clue they were killers. That scares me, and fascinates me.

I do, and I’m very excited about it! It doesn’t have a title yet, and without giving too much away it’s the story of a marriage gone wrong—I’ve had it compared to THE WAR OF THE ROSES by early readers, but without any of the funny bits the movie had.

Thank you, JoAnn  for answering my questions so thoughtfully and for giving such a fascinating insight into how and why you write.

Thanks to JoAnn for her informative answers to my questions and also to Abbie at Macmillan for sending a copy of What You Don't Know to me and for the invitation to be part of this blog tour.