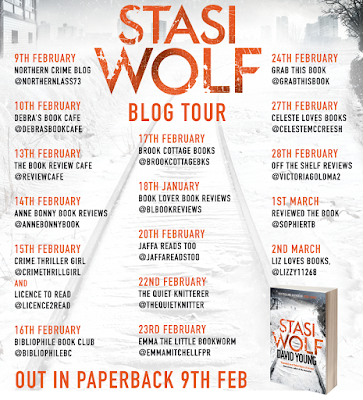 The idea for Stasi Wolf came originally from a conversation I had with a German crime expert at the Berlin police presidency headquarters back in – I think – 2013, when I was researching Stasi Child.

I’d already written the first draft of my debut novel, which had a senior Stasi officer in effect directing my Kripo detectives, including my main protagonist, Oberleutnant Karin Müller.

But some of the things I was hearing were making me think perhaps I’d got things wrong, and that the Stasi (East Germany’s reviled secret police) and Kripo, or K – the criminal division of the People’s Police – would never work together or liaise.

Time and time again I was told that everything was kept very separate. I couldn’t entirely believe this, and as I was writing fiction I wasn’t going to let the facts obstruct a good story too much anyway.

But Dr Remo Kroll – whose non-fiction academic work, Die Kriminalpolizei im Ostteil Berlins 1945-1990, is considered to be almost the bible of East German policing – told me of an interesting case in Leipzig where the Stasi had interfered in a Kripo case.

Not just interfered, but taken it away from them altogether.

The case was that of a series of baby murders in a Leipzig hospital. In April 1986 the senior physician at the hospital realised he had to take action. Over the past few months a total of four babies had died under his care – all of them injected with digitoxin.

The drug is used to treat heart failure and irregular heartbeat – but overdoses can be fatal.

Already rumours were starting to circulate in the city about the strange deaths. Fearing a scandal, the senior doctor alerted a contact at the local Stasi – who advised him that he should not contact the criminal police at all.

Instead the case came under the remit of the Stasi’s Special Commission – a kind of criminal division of the secret police, reserved for politically sensitive and serious cases.

This idea spawned the plot of Stasi Wolf – where infant twins have gone missing in the supposedly ideal socialist new town of Halle-Neustadt, where virtually every apartment is identical, and the streets are nameless – with addresses being a strange combination of numbers instead. A city whose reputation cannot be tarnished by an unsolved crime, or its citizens frightened by a child snatcher on the loose.

In my novel, the Stasi keep a close watch on my Kripo murder team – led by Müller. In reality, the Special Commissions – one for each Stasi district – conducted their own investigations, armed with the latest in western technology, and with the latitude to decide what was the truth and what wasn’t, and what should (or more often shouldn’t) be revealed to the public at large.
That real-life story in Leipzig told to me back in 2013 has just featured as part of a German TV documentary which for the first time exposes what the Special Commissions got up to.

Their role was still to solve crimes – but it a way that did not alert or alarm the public. So mistruths were often told and the full facts never revealed – not even to the victims.

Ironically a Stasi Special Commission also got involved in one of East Germany’s most famous murders, the Crossword Puzzle Murder, which happened actually in Halle-Neustadt in the 1980s, and is another inspiration for Stasi Wolf.

The key piece of evidence was an incomplete crossword found with the body of a murdered child. It prompted the biggest-ever handwriting sample collection exercise in the world. More than half a million samples collected. But on this occasion the Stasi’s manpower helped – rather than hindered – the Kripo team and later the same year the culprit was arrested.


East Germany, 1975. Karin Müller, sidelined from the murder squad in Berlin, jumps at the chance to be sent south to Halle-Neustadt, where a pair of infant twins have gone missing.

But Müller soon finds her problems have followed her. Halle-Neustadt is a new town - the pride of the communist state - and she and her team are forbidden by the Stasi from publicising the disappearances, lest they tarnish the town's flawless image.

Meanwhile, in the eerily nameless streets and tower blocks, a child snatcher lurks, and the clock is ticking to rescue the twins alive.. 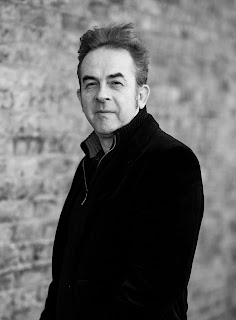 David Young was born near Hull and – after dropping out of a Bristol University science degree - studied Humanities at Bristol Polytechnic specialising in Modern History. Temporary jobs cleaning ferry toilets and driving a butcher's van were followed by a career in journalism with provincial newspapers, a London news agency, and the BBC’s international newsrooms where he led news teams for the World Service radio and World TV.

David was a student on the inaugural Crime Thriller MA at City University – winning the course prize in 2014 for his debut novel Stasi Child – and now writes full-time in his garden shed. In his spare time, he’s a keen supporter of Hull City AFC.

My thanks to the author for his guest post today and  also  to Emily at Bonnier Zaffre for the invitation to be part of this blog tour.