Jaffareadstoo is thrilled to be part of the blog tour for

Jerusalem Ablaze: Stories of Love and Other Obsessions 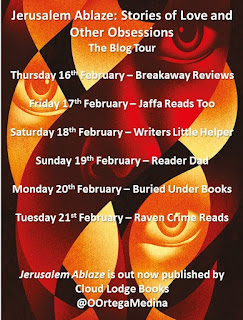 I am delighted to welcome the author, Orlando Ortega-Medina to the blog. 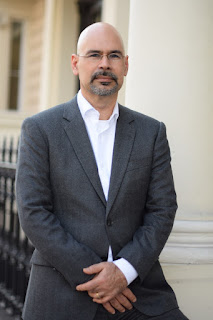 Today, Orlando is sharing a selection of his experiences which inspired aspects of the stories in
Jerusalem Ablaze

The stories in Jerusalem Ablaze are inspired by 4 periods of travel in my life: California, Quebec, Israel, and Japan. Following are notes from 2 of my Quebec stories:

"The Shovelist" is based on the real scenario of pensioners performing menial chores for their neighbours in the townships to earn extra money. In "The Shovelist", the chore is the shovelling of snow, which comes down by the bucketful in that corner of Quebec. Jake and Ronnie, being city outsiders, don't understand the importance of allowing Guillaume to shovel their snow, as they are perfectly able to shovel their own. So Guillaume has to find a way of demonstrating to them the value to having him shovel their snow. Jake and Ronnie eventually "get it" and accede, to their benefit (in my view). It's one of the gentler stories of the collection that strikes a chord in many readers.

"Tiger at Beaufort Point" is based on a real event. Near our township lived an eccentric gentleman on a large country estate who, controversially, bred domestic cats for sale to the public. He also kept a veritable menagerie of exotic animals - including a huge Bengal tiger he regularly hired out to film production companies. My partner and I drove to his estate to see his collection of animals. He kindly agreed to show us around and introduced us to his tiger, which he kept in his garage in a cage with thick metal bars. I remember coming to within inches of that tiger, close enough to feel its breath on my face, and experiencing the combined thrill of fascination and fear. One day he unexpectedly showed up in our township, having decided to take the tiger for a walk down our main street - to the delight of some and the consternation of others. The rumour was he was getting the tiger ready for a film and wanted to get it accustomed to being around crowds. My partner and I were having lunch at a nice restaurant when he suddenly walked past with the tiger, with half of the town in tow. I got quite upset, imagining the tiger breaking free and attacking the crowd. I probably overreacted. But the image of that tiger being walked around our town, surrounded by a crowd of people (children included) stayed with me, and I just had to write a story about it.

Orlando Ortega-Medina was born in California and is of Judeo-Spanish descent via Cuba. He studied English Literature at UCLA and has a Juris Doctor law degree from Southwestern University School of Law. At university he won The National Society of Arts and Letters award for Short Stories. Jerusalem Ablaze: Stories of Love and Other Obsessions is his first published collection. Orlando is now a British citizen and currently resides in London with his life partner, where he practices US immigration law.

Jerusalem Ablaze: Stories of Love and Other Obsessions collects thirteen eclectic works of dark fiction, taking the reader from Los Angeles to the eastern townships of Quebec, and from Tokyo to Jerusalem. Ortega-Medina’s characters are flawed, broken individuals, trying their best to make sense of their lives as they struggle with sexuality, death, obsession, and religion.

Gripping and intriguing, the stories are sometimes bleak, occasionally violent, and often possessed of a dark humour.

My thoughts about Jerusalem Ablaze...

I'm always in awe of authors who have that unique ability to take me away from my quiet life and transport me to an altogether different world, to a world that I would never inhabit in any of my wildest dreams. In the thirteen stories which make up Jerusalem Ablaze the author certainly takes the reader on a rather dark journey straight into the hearts and minds, of people, who are each, in their own way, superbly flawed.

It must be said that I enjoyed some stories rather more than others, and I found that I didn't want to read too many of the collection all in one sitting, which is why I think that Jerusalem Ablaze is one of those clever short story collections which will sit happily upon your book shelves, waiting patiently for that moment in time when you feel the need for a finely woven, and intelligently written, short story.

My thanks to the author for sharing his experiences with us today and also to Eve at Midas PR for her invitation to be part of this blog tour.