Blog Tour ~ Before the Rains by Dinah Jefferies

Before the Rains Blog Tour 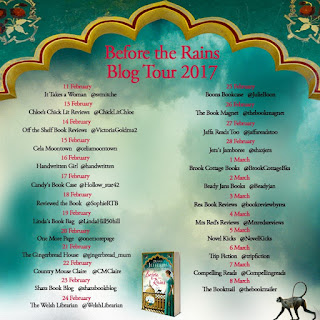 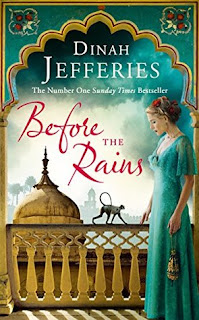 Hi and welcome Dinah, ‘In your research for Before the Rains did you discover anything which surprised you about the country or its people.’

All of Rajasthan was a delight but Jaipur and Jodhpur were both very much on the tourist trail and I found that disappointing. Though most people were smiling and friendly, you had to watch your bag, count your change, and avoid the constant hassle of someone wanting you to eat in their restaurant or visit their shop. But off the main tourist trails in places like Chandelao Garh and Shaphura Bagh we met nothing but friendly open people living a life style little changed for a century or more (although with motorbikes and mobile phones thrown into the mix).

Little children would follow us around, villagers would smile and offer us chai, once we were even invited to sample opium tea! I declined. The hosts at both Chandelao Garh and Shahpura Bagh, though from noble or ‘royal’ families, were delightful and treated us like house guests, sitting with us as we poured over their family archives to help with my research. We were lucky that some of the local villagers, who worked for them, accompanied us round the villages and happily asked on our behalf if we could take photographs of some of the interesting characters we met.

And in these more rural areas the wild life was astounding in its abundance. Away from the cities you felt you were in communities still as tightly knit into the land as they always had been. The Bishnoi villages in particular had round houses with conical thatched rooves and small walled yards. There, old men wearing exotic and colourful turbans sat just inside the doorways to shelter in the shade, but were still able to look out across the village as they chewed betel nut.

Women adorned with gold bangles and beautiful saris were preparing clay for the potter or mixing mortar for mud bricks, yet still they looked incredibly elegant and, though working at a hard and fast pace, their clothes remained spotless. Humming and singing seemed to accompany every group of workers. Out on the dry lands at the edge of the desert we met a lone ancient woman walking along a dirt track in a beautiful bright sari. We stopped and ‘talked’, each in our own language, neither understanding the other, but with smiles and gestures. The nearest huts or villages were many miles away yet she strode along the track in the midday heat of this desert country.

I suffer a lot from migraines and experienced a bad one at Shahpura Bagh. The ‘princess’ of the family was also a migraineur and she told me she knew the best neurologist in India - a friend who was a consultant in Delhi. ‘I’ll get you an appointment to see her,’ she said. Which she did. And the day before we caught the flight home I spent a morning in an absolutely teeming Indian hospital, the only non-Indian there. The neurologist was brilliant calling in another colleague who recommended I go to Queens Square in London to see the foremost world expert on migraine. I did and the good news is I am much better. So perhaps rather strangely that was the most surprising encounter I had while in Rajasthan.

Huge thanks to Dinah for sharing her wonderful trip to India with us and for allowing us a glimpse into just how seriously she takes her research.

But when Eliza arrives at the palace she meets Jay, the Prince's handsome, brooding brother. While Eliza awakens Jay to the poverty of his people, he awakens her to the injustices of British rule. Soon Jay and Eliza find they have more in common than they think. But their families - and society - think otherwise. Eventually they will have to make a choice between doing what's expected, or following their hearts.

Blog tour runs until the 8th March, so do visit the other stops for more exciting content and you can follow on Twitter using the hashtag  #BeforetheRains.