Blog Tour ~ The Devil in the Snow by Sarah Armstrong

The Devil in the Snow Blog Tour 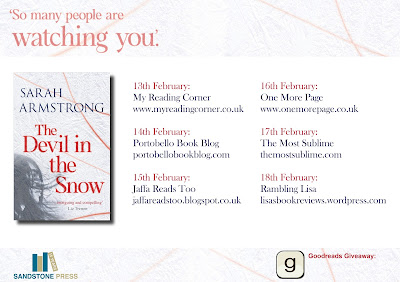 What's the book about ..

All Shona wants is a simple life with her young son, and to get free of Maynard, the ex who’s still living in the house. When her teenage daughter goes missing, she’s certain Maynard is the culprit. Her mother, Greta, is no help as she’s too obsessed with the devil. Her Uncle Jimmy is fresh out of prison and has never been entirely straight with her. Then there’s the shaman living in her shed. Shona soon discovers that the secrets she buried are as dangerous as the family curse haunting her mother.

As part of the book's blog tour, I'm pleased to be able to share a tantalising extract of The Devil in the Snow with you today...

Shona always felt relieved when she’d left Rob to get back to his life. She could feel herself slipping into the role of wife, rather than lover, if she stayed too long. The state of his room did make her feel better about her own house, untidy as it was. She tried to feel a little guilty for not having picked up shoes or emptied the dishwasher or, as Cerys kept pointing out, having sorted the last three weeks’ worth of washing. It would all keep. It would all need doing again tomorrow, whether or not she did it today.

She checked one last time that she had her mobile and keys, threw her leg over the bike and paused to unwind her wool scarf a little. Outside was warmer than inside, although the sky was still brutally clear. She decided to cycle the long way so she could go flat out on the fields by the school. Here, on the roads, she cycled slowly, enjoying the mild chill of the wind. There were leaves gathering in the gutters and a sense of bonfires to come, yet the schools had only just started their year. Only the week before honeysuckle had tingled in the air.

She turned into Victoria Road and stopped pedalling, putting one foot down. That boy was there again, where she’d last seen him a couple of months ago and two or three times before that. Dominic? That sounded right to her. He’d said something about the 1960s which she hadn’t quite understood. She had always regretted not telling anyone he was there. Not that she knew who to tell, but he was, maybe, sixteen – or older? It was hard to tell.

The bike wheels clicked around as she slowly coasted towards him. He didn’t look up. He was dressed in old clothes again that looked slightly too big for him, jeans and only a T-shirt. His hands were placed, palms upward, by his side, and his knees bent up as he leaned against a tree. As she got closer, she could see goose pimples on his arms and his bare feet buried slightly into the soil.

He opened his eyes. ‘I’ve been waiting for you.’

He nodded. ‘I’ve been waiting.’ He held his hands close to his face. ‘I think I’ve been here a while.’

‘Why are you waiting?’ she asked.

He put his hands back by his sides.

‘Is there someone I can call for you, let them know where you are? It’s Dominic, isn’t it?’

‘I have been waiting for you. I have to get my instructions.’

Shona waited to hear what they were but he carefully placed his hands on his knees and his head dropped forward. She rested her bike against the tree and crouched down next to him. There were bruises on his cheeks, cuts on the backs of his wrists, his eyelashes surprisingly long and dark.

‘Do you think that I might be the one to give you instructions?’ she asked.

Dominic lifted his face. ‘I think I need to stay with you.’

Shona bit down the automatic ‘no’. He needed help and she had to help him. It had to be a ‘yes’. Just until she found out what kind of help he needed.

She said, ‘I think you could come home with me for a little while to warm up. And we can decide what to do.’

‘Yes,’ he said. ‘It is you. Meghan sent me to tell you that there’s a message for you, when you’re ready.’

He nodded and she waited, but he didn’t say anything more. Meghan. How would he even know her name?

She stood up and held out her hand to him but he raised himself from the missing paving stone where the tree grew. As he got up he grabbed a handful of soil and put it in his pocket.

He pointed back the way she’d come. ‘I suppose you don’t want to go the quickest way. Past his house. He might be looking.’

She looked back down the road and back to him. ‘Have you been watching me, Dominic?’

‘So many people are watching you.’

His hazel eyes blinked once and he smiled. She shuddered. She didn’t want to know what he meant by that. 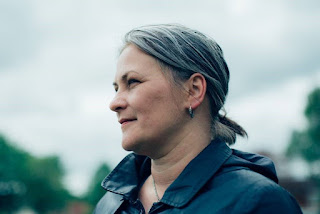 Sarah lives in Essex with her husband and four children. Her short stories have been published in magazines and anthologies, and she teaches creative writing for the Open University.


My thanks to the author and Keara at Sandstone Press for sending me a copy of The Devil in the Snow and for the invitation to be part of this blog tour.