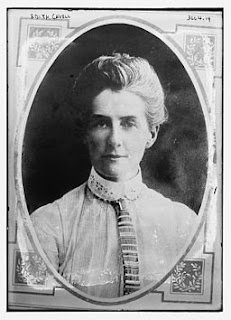 Edith Cavell was a British nurse working in occupied Belgium during the First World War. She was responsible for helping war casualties regardless of their nationality and helped hundreds more allied soldiers escape the Germans. She was arrested, tried and executed by the Germans in 1915.

Edith Cavell was born in Swardeston, Norfolk, the daughter of a rector, she had a brother and two sisters. Edith first worked as a governess in Belgium before training as a nurse in London. After working in London hospitals, Edith accepted a post as Matron of a training hospital in Brussels where she was largely responsible for recruiting and training nurses. She is considered to be the founder of modern nursing in Belgium.

At the outbreak of war in 1914, Edith was visiting her mother in Norfolk but returned to immediately to Brussels where her nursing school became a Red Cross Hospital, treating civilians and casualties from both sides of the war.

Following the Battle of Mons in August, 1914, Edith arranged for soldiers to be smuggled out of occupied Belgium and into neighbouring Netherlands, which remained neutral. She was arrested in August 1915 and imprisoned in St Gilles Prison in Brussels,

Edith was tried at court martial on 7 October 1915, along with 34 other people involved in or connected to the network. She was found guilty and sentenced to death. Edith Cavell was shot by a firing squad at the Tir National the Brussels firing range, on 12 October 1915.

Although her execution was legal under international law, it caused outrage in Britain and in many neutral countries, such as the United States. She became a symbol of the Allied cause, and her memory was invoked in posters and messages in Britain and around the world.

After the war, Edith's body was exhumed and escorted to Britain. A memorial service was held at Westminster Abbey, and she was reburied in Norwich Cathedral.