Today I'm thrilled to welcome to the blog guest author 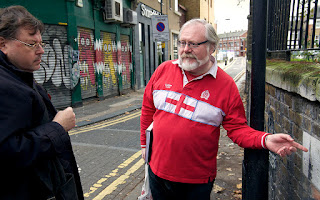 David is introducing us to his book

The Dark Side of  East London

The Dark Side of East London is intended to work on more than one level. At the most straightforward level it’s a collection of stories which are mainly criminal, and which are all concerned with darker deeds carried out in the eighteenth and nineteenth centuries. I’ve attempted to recreate the narratives from records such as the Proceedings of the Old Bailey, which can sometimes require a little judicious filling in! The important thing though has been to create readable stories, and accordingly at times I have used the present tense rather than the past to give a sense of immediacy.

This desire to bring the reader into the action has had its difficulties, particularly with regard to the chapter dealing with underage rape. This required treading a very fine line between responsible reconstruction and salacious detail. Nevertheless, I hope that the overall style of the book draws in the reader in a way that more straightforward narratives might not have done.

The reason for choosing stories of criminal acts and misdeeds is not in order to revel in sordid detail though. Like ghost stories, narratives of wrongdoing are anecdotal and so they provide evocative details of day-to-day life during times of crisis. As a consequence the stories I have chosen are intended to give the reader a feeling of what life was like, during my chosen period, in the Tower Hamlets, the settlements to the east of the City, in the shadow of the Tower of London.

On another level, this work is intended to bring into focus the importance of place. London is changing and developing over time, and the choice of time period for this book was made so that I might capture the change of character and feel as once individual settlements were absorbed by the nineteenth century sprawl of the metropolis of London. This change affected more than the demography; urbanisation and commercial advances brought new dangers to the people of London and other cities.

These stories are intended then to evoke the development of the East End before it became the East End, a term which did not come into use until the 1880s. But this is not a period to be seen in isolation, as if the past has no relationship with the present day. As a tour guide I am keenly aware that in places like London the past and present are really just chapters in the overall narrative. Similarly the future holds chapters which we have not yet reached. Time in London contends always with the imperatives of place, and often it is overridden.

The photographs which illustrate the book underline this idea. They have been taken especially by my friend and guiding colleague Alan Tucker and anchor many of these stories from the past firmly in today’s Tower Hamlets. The visible heritage of the East End and its story of continuity are important to me personally. I was born in Bethnal Green in 1964 and am still here, and my feeling for London’s ongoing story is embodied in my collection of short stories Death and the City, which takes the inspiration for its twelve stories from London lore and history that I have learned growing up here.

Although I am a City of London guide and a member of the London-wide guiding cooperative Footprints of London, I am also a member of the Tower Hamlets Walkshop, a guiding workshop group which has been developing on the back of an adult education course I teach locally. We are seeking to develop a coordinated guiding structure for the East End, and this book is a part of the overall initiative to maintain an awareness of the area’s continuity.

So much of our heritage – locally and nationally – is still under threat. In many ways it seems that the lessons of the 1960s and 1970s have not been learned, so the more we can appreciate the closeness and relevance of our past to our present, the less inclined we will be to let it go, and the readier we will be to embrace our part in this ongoing narrative. I hope this book will contribute in some way to encouraging this engagement.

You can find more about David by clicking here

Find his books on Wordery.com

The Dark Side of East London so eloquently.

My Thoughts about The Dark Side of East London..

Living, as I do, in the North of England, I'm not hugely familiar with London and even less so with the east of the city, so it's been remarkably refreshing to read The Dark Side of East London and to learn things about the east end which I never knew existed. True, I'd heard the old Victorian myths and legends which sort of define the area, the most notorious being Jack the Ripper's association with its mean and murky streets, but what I didn't realise was that, in the eighteenth and nineteenth century, this area was blamed for so much social injustice, and thus was, ultimately accountable for pioneering social change within its boundaries.

The book is divided into nine absorbing chapters which highlight the darker days of crime and punishment, and as detail emerges, what becomes apparent is that this area of London was nearly always at the sharp end of the action. I think my favourite chapter has to be “Poison for the Asking”, as in the days before the 1868 Pharmacy Act it was all too easy for people to get their hands on noxious substances which they used, either in ignorance, or malice, with devastating and often, catastrophic effect.

The author writes with knowledgeable insight into this area, it is, after all, a place he knows like the back of his hand. However, what’s so important is that his zeal and passion comes across in the stories he shares and in the amount of meticulous research which has gone into bringing the book to life. There is much to take in, and because of that, this is not a book to whiz through at high speed, rather it is more to be savoured slowly, allowing the facts to unfold in fascinating detail. The book also shares some specially commissioned photographs which help to put old and new into context and which show those areas which have been highlighted in the stories.

Those who are acquainted with this area will no doubt be familiar with some of its dark and convoluted history. I think that the author has done a commendable job of highlighting, perhaps, some of the more forgotten, but no less remarkable, history of The Dark Side of East London.