A special feature available today from Audible ~ "Send This Book "

Audible, the world’s largest retailer and producer of audiobooks and other spoken-word entertainment, today announces the UK debut of ‘Send This Book’. The feature allows listeners to give any audiobook they own in their ‘My Library’ to others instantly via e-mail, text, Facebook Messenger or WhatsApp, using their iOS, Android or Windows 10 device.

Each recipient gets their first title for free to download and keep forever, whether they’re an Audible member or not.

To mark the occasion, some of Britain’s best-loved scientists, authors, artists and athletes are giving away the audiobooks they consider essential listening.

On Friday 18th November Jon Ronson, Gemma Cairney, Mary Beard, Robert Winston, Karren Brady, Jude Kelly, Matt Dawson and Noma Dumezweni will each be sharing a link to their chosen audiobook on Twitter, inviting members of the public to download the title for free. Featuring a mix of side-splitting comedies, iconic classics and fascinating biographies their must-listen recommendations include: 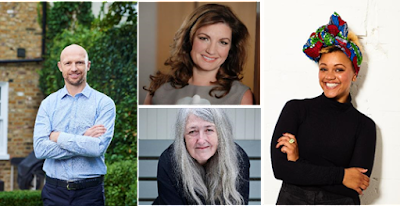 Jon Ronson, Author of ‘The Psychopath Test’ and ‘The Men Who Stare At Goats’

A Very English Scandal: Sex, Lies and a Murder Plot at the Heart of the Establishment
Written by John Preston, narrated by Daniel Weyman

“This is a brilliant, funny, sad, startling nonfiction novel about the Jeremy Thorpe murder-plot scandal. I barely remember it from my childhood – just some hazy memories about a liberal MP and a dog and a field and a gun and my parents being furious that the Westminster elite got away with it like they always do. The details, it turns out, are astounding. But unlike less ambitious nonfiction writers, John Preston is not content to just tell a great story. He’s told it in a great way. It is as funny and dark as anything by Evelyn Waugh or Jonathan Coe. And in these post Cyril Smith/Jimmy Saville days, it’s so timely and relevant.”

“When this book came out a few years ago, a friend of mine took me to see Patti Smith in the intimate and enchanting setting of the Union Chapel in Islington to watch Patti read extracts and perform. It was a beguiling and extraordinary experience, watching her, was like watching no one I'd ever seen before. Listening to audio version of this book, takes me right back to that night. One never to be forgotten.”

The Odyssey
Written by Homer, narrated by Anton Lesser

“The Odyssey takes us back to the very origins of Western literature. If you think ‘origins’ are likely to be crude and roughly formed, you're in for a shock. This is a marvellously sophisticated tale of homecoming, temptation, adventure and the contested boundary between civilisation and barbarity. There's no better book to listen to, because it was first composed not to be read, but heard in oral recitation: the original talking book.”

Robert Winston, Professor of Science and Society at Imperial College

“One of the most unusual autobiographies I have ever read. It gives a background to the content and style of one of our greatest fiction writers and what it really means to be a spy.”

“Pacier than a runaway train and more twists and turns than a roller-coaster. A blockbuster of a crime, thriller suspense. In short the body of a drug dealer and an ex-cop turn up in a warehouse owned by a famous basketball player resulting in murder, espionage, betrayal, secrets, relationship emotions – this book just about has it all! At the heart of it all is a love story, but it’s dark and twisted – it’s one hell of a good book!”

“A young white girl scrutinises her community as its racism is revealed and then silently champions her father as he battles for legal justice for his wrongly accused black client. It's a 1960s novel with a frighteningly contemporary relevance and such a powerful read.”

“This timeless bed time soother entertains me most evenings. Oh yes.... the boys love it too. When Alex and Sami join in with 'Whoosh it was gone' there's a smile on all three of our faces because we believe it. Scaring Dragons, making potions and simply cruising on a broom with a shower, what better thought to have in your mind before a snooze.”

“The best kind of storytelling – The Alchemist seems simple enough, the journey, the obstacles and the transformation... but the depth of feeling one has if open to it is why it's brilliantly received. Such a pleasure.”

All of the above can be downloaded now  click here


All the audiobooks featured are available to download free for today only (between 09:00 Friday 18th November and 09:00 Saturday 19th November).

To use the feature, customers simply hit the share icon when listening to an audiobook, then tap ‘Send This Book’, select their preferred sharing method (email, text, Facebook Messenger or WhatsApp) and enter the recipient’s contact information. Users can send each audiobook to up to 10 people.  If it is a recipient’s first time accepting an audiobook via this feature the recipient does not need to sign up for a free trial or use a credit card to download the title.

Tracey Markham, UK Country Manager at Audible, said: “Our members know how irresistible a good audiobook can be. Now, for the first time, listeners can share their enjoyment by sending complete titles to anyone in the UK for them to download and keep forever without having to pay a penny. Whether you’re a book club member who wants to share an audiobook with the entire group, a teacher recommending a title to your class, or an enthusiastic listener giving to a friend, Send This Book lets you share the audiobooks you love with those you care about most.”

Audible, an Amazon.com, Inc. subsidiary (NASDAQ:AMZN), is the leading provider of premium digital spoken audio information and entertainment, offering customers a new way to enhance and enrich their lives every day. Audible was created to unleash the emotive music in language and the habituating power and utility of verbal expression. Audible content includes more than 200,000 audio programs from leading audiobook publishers, broadcasters, entertainers, magazine and newspaper publishers, and business information providers. Audible is also the preeminent provider of spoken-word audio products for Apple’s iTunes Store.

Thanks to Audible and Francesca at Midas Public Relations for permission to share this information with my blog readers.