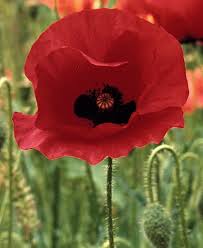 At "the eleventh hour of the eleventh day of the eleventh month" in 1918 the guns grew silent on the Western Front. The Armistice of Compiègne was signed between the Allies and Germany and went into effect at 11am, Paris time, on the 11th November 1918 .

On the 8th May 1919 a letter appeared in the London Evening News written by Australian journalist, Edward George Honey, who proposed that a respectful silence should be observed for those who had given their lives in the First World War. This article was brought to the attention of King George V and on the 7th November the king declared that...

"All locomotion should cease, so that, in perfect stillness, the thoughts of everyone may be concentrated on reverent remembrance of the glorious dead."

Since 1919, on the second Sunday of November, otherwise known as Remembrance Sunday a two minute silence has been observed at 11am at war memorials, cenotaphs, religious services and shopping centres throughout the country.

In Our Family - We Remember