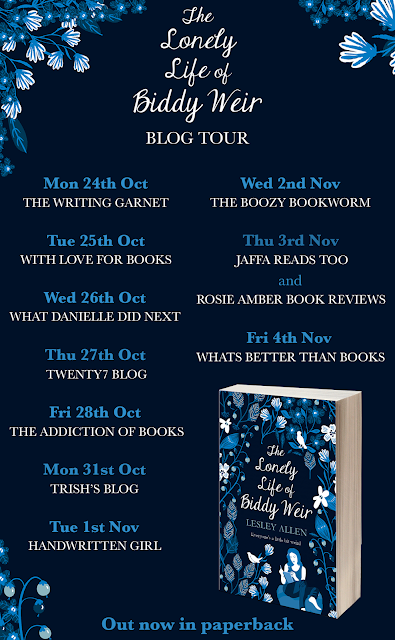 Biddy Weir is a shy young loner. Abandoned by her mother as a baby, and with a father who's not quite equipped for the challenges of modern parenting, Biddy lives in her own little world, happy to pass her time painting by the sea and watching the birds go by.

With no friends, no schoolbag, and, worst of all, no mother, Biddy is branded a ‘Bloody Weirdo’ by the most popular girl in her primary school.

What follows is a heart-breaking tale of bullying and redemption, of falling down and of starting again, and of one woman's battle to learn to love herself for who she is.

Set in a fictional seaside town in Northern Ireland, the novel is a stark illustration of the extent to which bullying can affect us all, beyond just the victim and perpetrator.

Spare, dark and often unrelenting, The Lonely Life of Biddy Weir is a story with universal appeal, which ultimately affirms the value of being different. 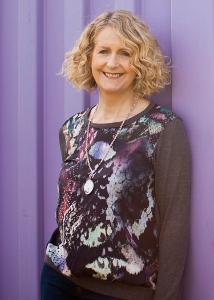 Lesley , thank you so much for sharing with us your perspective on the subject of bullying

Can fictional bullies help us deal with the real ones?

From Chris Hargensen (Carrie) to Regina George (Mean Girls) and Nancy Olsen (Little House on the Prairie) to Veda Pierce (Mildred Pierce), we’ve all watched or read about a female bully we love to hate. Nurse Ratchett, Delores Umbridge, Miss Trunchball, Veronica from Heathers, V from Orange is the New Black… there are oodles of them. But what happens when they pop up in real life? When ‘the bitch’ isn’t someone acting a part in your favourite TV drama, or a character in the book you’re reading – but a real person: a young girl, a teenager, a grown woman, someone you actually know? Maybe you are their target. Or perhaps their victim is a friend, a colleague, an acquaintance? Maybe you don’t even know them, not really, but you see it anyway, the damage that is being done. What do you do? Who do you turn to? How do you react, respond, retaliate?

I didn’t necessarily plan on writing a book about bullying. The subject matter wasn’t the thing that came first for me, it was the character. Biddy Weir, this shy, socially awkward, unconventional little girl arrived in my life, fully formed and vividly clear, demanding to tell me her story. I really wasn’t sure exactly what had happened to her at first, but I knew from the get-go that she was being bullied; not just teased a little, but chronically, relentlessly persecuted. And as Biddy was talking, this other character emerged, just as fully formed, just as vivid. Her name was Alison Flemming, and she was a total horror. There were many times throughout the writing process that I wanted to slap her on the face. I couldn’t quite believe how inherently bad she was, but at the same time, I knew she was utterly real.

Many people have asked if Biddy is me, and if Alison is someone I know. She isn’t, and she isn’t. There’s maybe a pinch of me in Biddy (we both have curly hair, and I was teased about it as a child), but she is essentially a hybrid of several people I’ve encountered over the years, both male and female. Alison too is a fusion of real life characters I’ve known, some from my early childhood, some from my teenage years, and some from my adult life. As my daughter progressed through school, other ‘Alisons’ appeared. We all know at least one, don’t we? (Just to be clear, all ‘Alisons’ aren’t called Alison! One of my dearest friends is an Alison, and she’s adorable!)

I don’t think it’s giving too much away to say that The Lonely Life of Biddy Weir isn’t an easy read at times. There were times when it wasn’t easy to write; times when I found myself roaring with rage at Alison’s behaviour, or weeping at Biddy’s pain. The bulk of the story is set in the 1980s, when the world wide web was still in its infancy, and social media was the stuff of Tomorrow’s World. But if they had existed, or if Biddy’s story had been set today, she simply wouldn’t have survived. She, at least, had some respite from her tormentors; after school, weekends and holidays. As we hear too often, there is no such escape today, as the recent tragic case of teenager, Felix Alexander, highlighted.

Bullying has been around since the dawn of time, but is has now become a plague, a social epidemic. And it seems there is no cure. But there must be, mustn’t there? And maybe fiction can play a part. Perhaps reading about or watching the antics of those fictional bullies and the anguish of the people they victimised, can help? How did we feel, for example, when we witnessed Chris Hargensen plot the bloody humiliation of Carrie, or watched Veda Pierce yet again destroy her mother’s new-found happiness? What did we want to say to them? Perhaps more importantly, what did we want to say to Carrie and Mildred? ‘Be strong’; ‘walk away’; ‘you are better than she is’; ‘her soul is ugly – yours is beautiful, see it’; ‘do not let this, let her, define you’.  Perhaps our instinctive, raw, impassioned reactions to the abhorrent actions of fictional bullies can provide the courage and the creativity to confront the real ones. Biddy’s story is just making its way into the world, but already I’ve been moved to tears by some of the responses from readers. People have told me about their Alisons, about the Biddys they know. Some have thanked me for ‘telling their story’, some have said reading the book was a cathartic experience, others have said they will no longer stand silently on the side-lines and watch as someone is bullied, fearful of intervening. I have had mental health practitioners share the book with co-workers and clients, and teachers recommend it to year 12+ pupils and their parents.

This has all been an unexpected twist in Biddy’s tale. As I was writing the book, I never imagined it would help people, never anticipated such a visceral reaction. But in this National Anti-Bullying month, I hope that her story helps many more people confront the bullies in their own lives, and that maybe, just maybe, it might be responsible for stopping just one ‘Alison Flemming’ in her tracks.

Lesley Allen lives in Bangor, County Down. She is a freelance copywriter and the press officer and assistant programme developer for Open House Festival. Lesley is previous recipient of the James Kilfedder Memorial Bursary, and two Support for the Individual Artist Art’s Council Awards. She was named as one of the Arts Council of Northern Ireland’s 2016 Artist Career Enhancement Scheme (ACES) recipients for literature. She will be using the award to complete her second book.

Huge thanks to Lesley for this emotive guest post and also to Emily  at Bonnier Zaffre for her invitation to be part of this blog tour.