The author in my spotlight is .....Lynne Barrett-Lee 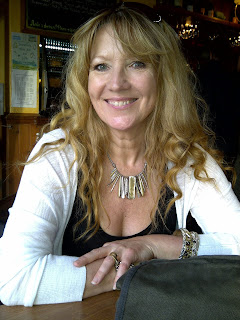 
Hi and welcome to Jaffareadstoo, Lynne. Please tell us about yourself and how you became interested in writing.

I have wanted to be an author since I was still quite a little girl. I particularly remember reading the Laura Ingalls Wilder books (the first was Little House In The Big Woods) and as well as feeling bereft at having to say goodbye to Laura’s life and world, I also recall a sense of something like agitation; something I later identified as a constant bedfellow to the ‘I so enjoyed reading that’ feeling - the ‘oh, how I wish I’d written that!’ response. It’s never really gone away. It hit me hard, recently, reading Donna Tartt’s The Goldfinch.


I’ve been a committed writer since my teens, when I had a little flurry of confidence-building agent attention, but I was in my thirties, with three little ones, before the writing stars aligned for me and I was finally able to take the biggest step – to make it my priority, and give it my best shot to get published. I gave myself a year, and just sneaked in at the 11th hour, earning £90 for a piece in the Times Educational Supplement. It took me another nine months of slog to sell my next piece – a short story for The People’s Friend. For which I got £50. I was a very poor writer for a very long time… I feel very lucky to be well paid now for doing something (to loosely paraphrase Mark Twain) that I’d be doing anyway, for love.


Where did you get the first flash of inspiration for your novel, Able Seacat Simon?


I didn’t! I was approached by the publisher, with whom I’d already had a number of books published as a ghostwriter (including one about a very large dog) because they thought it might be the kind of project I’d enjoy. It came about because my editor also had a black and white cat called Simon, and her partner stumbled upon the story of the other, more famous, Simon – and duly rushed home to tell her all about it. I’d never heard of Simon, much less the story of the Yangtse Incident, but, being the owner of two RSPCA rescue cats, one of which looked just like him, it was as if the project was made for me. I said yes immediately, without really thinking about whether I could fit it in, let alone do it! But, of course, I just knew I could and would…

What can you tell us about the story which will tempt the reader's interest?


It’s a factual piece of history, but it has everything a riveting story needs. It’s full of tension, excitement, drama, and heroism, and (if it doesn’t sound too cheesy) is also full of characters who embody both what’s finest about the human spirit and, of course, what’s finest and noblest about cats; animals which are often described as being aloof, solitary and selfish. It’s also perfect escapism. It takes the reader away to a time and place most won’t have been before; from Hong Kong, via the high seas, to the famous Yangste river.

The story is inspired by real life events - when you were researching the story about Simon did you discover anything which surprised you?


I learned so much researching the book. I had to, in order to do the story justice – from learning the lingo of sailors, which is actually called ‘jackspeak’, to being able to describe all the parts of a ship and understand exactly what makes felines tick. In terms of surprises, no big ones, but lots of fascinating ones – such as the legend that, if crossed, cats could conjour terrible storms from magic stored in their tails. That’s why, to this day, a ship’s cat – even a stowaway like Simon – would never be thrown overboard.

What were the challenges you faced in writing the book from a cat’s perspective?


Remarkably few, considering I'm not one! I’ve written a few short stories down the years from animals’ points of view, and always enjoyed it, which was one of the reasons I said yes to writing the book without hesitation. It’s great fun for an author to get inside the head of different characters, and ‘becoming’ Simon was no different. My first, and really only, challenge was to decide on how things would work logistically e.g. that Simon could understand every word the humans around him said, as Anna Sewell did with Black Beauty, and having him naïve initially about all the strange things humans did. For example, Christmas Crackers – why would humans rip something they’d made apart and make such horrible noises, for fun? And why would they cry when they were happy? I also had to give Simon a human-inspired personality, and, since he was orphaned so young, but had learned so much from his beloved mother, always saw him as a plucky survivor; a kind of mixture of Oliver Twist and The Artful Dodger.

What were the most rewarding aspects of bringing Simon’s story to a wider audience?


For me personally, the level of contact I’ve had from readers. I’ve had letters and postcards and emails - not to mention a couple of gifts - from people of all ages and from all walks of life. I had no idea so many people still remembered Simon’s story – a couple of people even wrote to tell me they had met him, when, in 1949, the Amethyst returned home to Plymouth after the Yangtse incident. Back then he really was something of a celebrity. And though it sounds a bit weird, I’ve been so moved to receive correspondence from retired naval men, to tell me they were physically moved to tears. For an author, that’s pretty special. So I suppose most rewarding is the knowledge that Simon’s story – and that of the heroic young men he served with – is being kept alive for another generation.


You’ve recently published a special children’s adaptation of Able Sea Cat Simon, did preparing the book for children present any problems in terms of book content?

Not for me, happily. The book was adapted by a professional abridger, who is experienced in creating narrative suited to a 7 years+ readership. Had it been left to me, I'm sure it would still be full of my favourite long words, and myriad (that’s one of them) complicated sentences… My role was actually rather simple. To read it through at each stage and check I was happy with the changes. And, apart from the odd tussle over a sentence or phrase I was determined to keep, I was. They did a wonderful job, I think.

What is the main thing you want readers, young and old, to take away from your book?

Anything they want, because that’s not down to me, of course. Obviously, I hope everyone who reads it enjoys it, even if it does make them cry at the end. Though, if pushed, I suppose I’d like the young people to take away that important slice of naval history, which I hope has been delivered without sounding too much like homework… For the more mature readers, who might already know about the Amethyst and Simon, I’d like it if I gave them a few hours of escapism, back into a world they once knew. For all readers, well, that’s simple. A reminder that the relationship between humans and animals is very precious, and that we should always treat them well. ☺

I have been privileged to read Lynne's lovely story about Able Seacat Simon. At first I was drawn to the book cover as Simon looks exactly like a cat I once had called Sneeky-Peeky.

From the very first page I was completely enamoured with Simon, he's such a sweetie and oh so frightened to be left all alone on Stonecutters Island, Hong Kong. He's hungry and lost and never sure where he will be able to scavenge his next meal. So when he was picked up by Ordinary Seaman George Hickinbottom and smuggled on board HMS Amethyst and given a whole pilchard all to himself, well I just knew that this little kitten was going to have a grand adventure.

The adult version of Able Seacat Simon is certainly readable in few hours and I really enjoyed seeing how the story evolved. I must admit that I had never heard of the Yangtze Incident and Simon's story wasn't at all familiar but what's so special about this story is that it explains what happened to Simon and the crew of HMS Amethyst in an entirely readable way. I loved Simon, his voice is strong and unique, he was such a brave little fellow, full of valour and enthusiasm and I would image that he was a real joy to have on board ship especially as he had a special knack for catching rats!!

The children's version is equally enchanting it’s one of those special stories that would make perfect bedtime reading for a confident young reader.  The text is clear and concise, the font is a good size for comfortable reading and the added inclusion of a glossary at the end of the book is a really useful addition and explains words which young readers may not be familiar with

This little snippet caught my eye; it's a quote from Simon's mother to Simon when he was a kitten - a saying which, I think, will ring true for humans too.

Able Seacat Simon was awarded the Amethyst Campaign medal and is the only cat ever to be awarded the PDSA’s Dickin Medal.

He was quite a hero - I'm sure that everyone will fall in love with Simon's story as much as I did.

Huge thanks to Lynne for spending time with us today and for sharing her wonderful story.

And also to Jade at Simon and Schuster for her help with the children's book image.