It was always my intention to continue this small corner of remembrance to the service of those who lived through, or who fought and died, during the First World War. After all, the war lasted until 1918, so I've still a way to go before I need to start winding up this tribute.

This year will be slightly different in that, as well as looking for those forgotten poems which sum up national feeling and fervour, I will also share interesting articles and feature reviews of WW1 books I have read or which have inspired me in my quest to discover more about the Great War. I'm a regular visitor to the Imperial War Museum North and will keep a watch for any interesting exhibitions to feature.

I'll start this new collection of WW1 remembrance with photographs from a recent visit to Liverpool to view the Weeping Window of Poppies which was on tour during 2015. You may remember the overwhelming exhibition of 888,246 ceramic poppies at the Tower of London in 2014 to mark the centenary of the start of WW1.

During 2015, three locations were chosen to host the installation of this exhibition of ceramic poppies; Yorkshire Sculpture Park, Woodhorn Museum in Northumberland and St George’s Hall, Liverpool. The sculpture comprises approximately 10,000 poppies, and was designed by Paul Cummins and Tom Piper. The Weeping Window can be seen in Liverpool until the 17 January 2016.


Liverpool's iconic St.George's Hall, with its significance as a WW1 recruiting station, made a stunning backdrop for the Weeping Window. 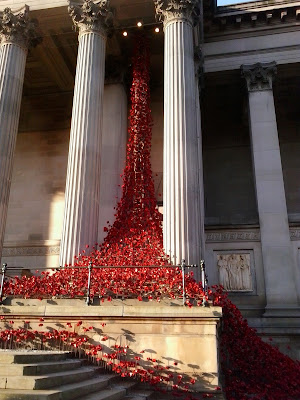 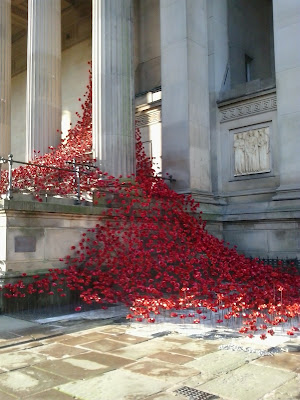 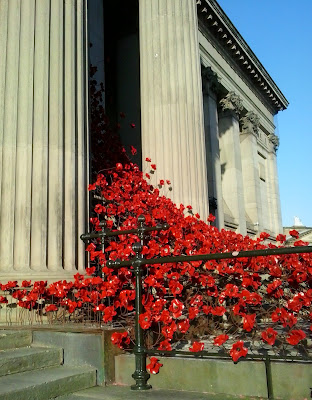 And as a cooling breeze catches the poppies they shudder and sigh and in the whisper of the wind you sense them watching..

In Flanders fields the poppies blow
Between the crosses, row on row,
That mark our place....