Jaffareadstoo is delighted to be part of this exciting blog tour 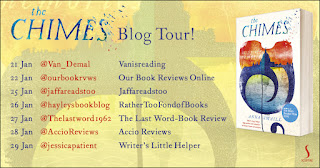 What's The Chimes all about...

Imagine a London orchestrated by a vast musical instrument that destroys memory. Each object weaves its own melody and song rings into every drip of air, yet each day feels the same as the last and that is part of the mystery....

Anna Smaill has created a world where music has replaced the written word and memories are carried as physical objects. Memory itself is forbidden by the Order, whose vast musical instrument, the Carillon, renders the population amnesiac. The Chimes opens in a reimagined London and introduces Simon, an orphaned young man who discovers he has a gift that could change all of this forever. Slowly, inexplicably, Simon is beginning to remember – to wake up. He and his friend Lucien will eventually travel to the Order’s stronghold in Oxford, where they learn that nothing they ever believed about their world is true.

And here are my thoughts...

With melodic candour The Chimes weaves an altogether unusual coming of age story about the power of memory and the shaping of lives bereft of the ability to recall past events. The insidious removal of generic recall is forbidden by the shadowy group, which is known only as The Order, and who subtly control a vast musical instrument called the Carillon which extracts public memory. The destruction of memory and the fundamental right of everyone to cherish hopes and dreams forms the basis of this beautifully observed story. And by focusing the story on a dystopian London there is an authenticity which is made frighteningly realistic by the sharp observation of people and places.

There is such a poetic resonance to the story, which flows so beautifully, that I felt like I was reading a piece of music and from the outset was drawn into a sharply observed world, where the principles and attitudes of distrust are allowed to fester. It is clear from the outset that the pervading menace is all consuming, and our main protagonist, Simon needs not only to understand his limitations, but must also be excruciatingly aware of the need to cherish his memories and to keep them close.

The language used throughout is imaginative and rather special and even those readers who have no great knowledge of musical vocabulary will start to understand the hidden nuances behind the words. However, some of the earlier parts of story, it must be said, are quite challenging, and until the terminology starts to resonate it may take just slightly longer to get the gist of what’s happening. However, throughout the story there is a wonderfully inventive feel to the narrative and an incredible urge to read on in order to find out just a little bit more about this dystopian world which has been so lovingly recreated.

Best Read with…tea laden with spices and a memory of golden meat pasties, succulent with gravy.. 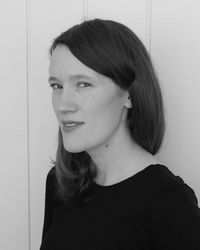 
Do visit the other stops on the tour