I am delighted to be involved in this exciting Blog Tour

October 1396. Attending the marriage of Richard II, King of England, Joanna of Navarre encounters Henry Bolingbroke, the Earl of Derby. Their attraction is immediate and mutual, despite Joanna’s marriage to the much older John, Duke of Brittany.

Several years later, Henry has been crowned King of England having overthrown the tyrannical Richard, and the recently widowed Joanna is surprised to receive a proposal of marriage from him. To accept means losing her sons, and abandoning her Regency of Brittany, but unable to discard her still-strong feelings for Henry, Joanna reluctantly agrees.

I am delighted that Anne O'Brien has written this very special guest post for Jaffareadstoo.

In February 1400, Joanna of Navarre, Duchess of Brittany and newly widowed, wrote this letter, in her own hand, to King Henry IV of England.  It was within five months of Henry becoming King of England in September 1399 and within three months of the death of John Duke of Brittany, Joanna's husband, on 1st November 1399.

My most dear and honoured lord and cousin,

Forasmuch as I am eager to hear of your good estate - which may our Lord make as good as your noble heart can desire, and as good as I could wish for you - I pray my most dear and most honoured lord and cousin that you would tell me often of the certainty of it, for the great comfort and gladness of my heart.  For when ever I am able to hear a good account of you, my heart rejoices exceedingly.  And if of your courtesy you would like to hear the same from over here - thank you - at the time of writing my children and I are all in good health (thanks be to God and may he grant the same to you) as Joanna de Bavelen, who is bringing these letters to you, can explain more plainly ... and if anything will please you that I am able to do over here, I pray you to let me know: and I will accomplish it with a very good heart according to my power.  My most dear and honoured lord and cousin, I pray the holy Ghost that he will have you in his keeping.

Written at Vannes, 15th February, the duchess of Brittany.

What do we make of this letter?

It is friendly in tone, warmly considerate, and obviously in reply to an earlier letter from Henry to Joanna, enquiring about her health and that of her children.  It is deeply courteous and has strong religious references.  What is clear is that it is not simply a letter between one ruler and another (Joanna was Regent of Brittany for her young son at the time).  It may not be a love letter in the accepted sense, but it is certainly more than a diplomatic missive.

So what was their relationship in February 1400?

We know that Joanna and Henry had met previously and probably on more than one occasion, since through her mother, Jeanne de Valois, a French Princess, Joanna was closely connected with the French royal family.  Certainly Henry and Joanna would have been in the same group of high-blooded nobility at the marriage of Richard II and the six year old Isabelle de Valois at Calais in 1396.  Most probably they also met when Duke John was made a Knight of the Garter at Windsor in April 1398.  We know that Joanna attended this celebration with her husband.  There is also a high probability that they met when Henry was in exile in France after Richard accused him of treason. Froissart says the John of Brittany lent Henry ships to return to England.  Although this seems unlikely since Henry landed with few personal followers at Ravenspur, and with no foreign troops, it does suggest that there was a connection between Henry and the Brittany household.

Were Joanna and Henry attracted to each other from these early meetings?  Both were mature, respectable people in their early thirties rather than young and foolish, both with their own growing families, and both with a reputation for piety.  Was there any impropriety between them?  There is certainly no evidence of this.  Joanna's husband might be more than twenty years older than she, but their marriage appears to have been built on strong affection and respect.  But whatever the truth of it, the attraction between Henry and Joanna was strong enough to cause these letters to be written once Joanna was widowed.

How many such letters passed between them?

We have no idea.  If they were all of this nature, it was definitely a lukewarm wooing, and yet events leading to their marriage were immediately set into motion.  Three months after Duke John's death Joanna sent ambassadors to Henry's court.  By March 1402 a papal Bull had been obtained to allow their marriage (they were related within the degrees of prohibited consanguinity) and in April of the same year Joanna was married by proxy to Henry at Eltham Palace, witnessed by the Archbishop of Canterbury and some of Henry's closest friends.  Her ambassador, John Rhys, stood in for her as the bride.  Finally Joanna travelled to England, met with Henry in Exeter and their marriage took place at Winchester in February 1403.  During all this time they did not meet once, until Henry travelled to welcome her in Exeter.

So we are still left to ponder whether this was a love match, conducted at a distance, or not.  Certainly on first glance there were few advantage to this marriage, and many stumbling blocks to it ever coming to fruition.  War was once more looming between England and France.  The prospect of Joanna's marriage to the King of England would find no favour with all her Valois uncles and cousins at the French court.  Furthermore it would undermine her own power in  Brittany.  Joanna could not expect to remain Regent of Brittany as well as Queen of England.  She would also, as it happened, be forced to give custody of her sons into the care of the Duke of Burgundy and leave them behind.

For Henry, the ongoing trading disputes between English and Breton merchants were sufficiently keen to make this proposed marriage alliance unpopular with parliament, but  there was an advantage for Henry if he could achieve an important bride.  It would be no bad thing for him to have such a well connected woman as his wife, given the fact that he had just usurped the English crown.  Henry was intent on improving his European status.

So what is the outcome for us?

We are still left with little evidence to get below the surface of this very adult relationship.  What we can surmise is that their courtship was conducted by 'go-betweens', such as the lady Joanna de Bavelen, by word of mouth.  What was not written down could not be used in evidence against them.  When Henry's Royal Council asked the purpose of the Navarrese ambassadors at the English court, all Henry would say was that they would be informed in due course.

All in all, their desire to marry was strong enough to bring them together after three years of being apart.  It was strong enough for Joanna to leave her country, her power and her sons, to be with Henry.  And so I like to think that it was a love affair: a very private, understated emotion.  They remained very close until Henry's death ten years later, putting aside war and insurrection to spend every Christmas together, usually at Eltham Palace.  Sadly, although both with large families from their previous marriages, they had no children together.

Finally, have we indeed lost more of these letters?

I am sure that we have.  In Joanna's personal possessions, confiscated when she was imprisoned for witchcraft in the reign of Henry V, there was a pen case and a silver-gilt inkhorn engraved with the words 'God make us goode men.'  Was this a gift from Henry, to keep him in her mind as Joanna wrote to him, even though they were apart for so long?  It is a gift that seems to fit their temperaments very well. 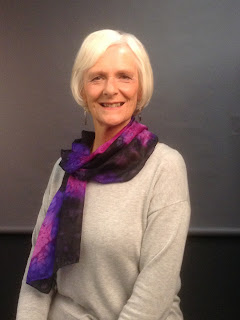 ANNE O’BRIEN was born in the West Riding of Yorkshire. After gaining a BA Honours degree in History at Manchester University and a Master’s in Education at Hull, she lived in the East Riding for many years where she taught History. Leaving teaching – but not her love of history – Anne turned to novel writing and her passion for giving voice to the oft forgotten women of the medieval era was born. Today Anne lives in an eighteenth-century cottage in Herefordshire, an area steeped in history and full of inspiration for her work.

Huge thanks to Anne for her fascinating insight into this most enigmatic of royal couples and also to Sophie at ED public relations for her help with this Blog Tour.

Do visit the other stops on the tour.