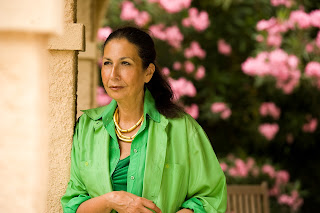 Hannah Fielding is an incurable romantic. The seeds for her writing career were sown in early childhood, spent in Egypt, when she came to an agreement with her governess Zula: for each fairy story Zula told, Hannah would invent and relate one of her own. Years later – following a degree in French literature, several years of travelling in Europe, falling in love with an Englishman, the arrival of two beautiful children and a career in property development – Hannah decided after so many years of yearning to write that the time was now. Today, she lives the dream: writing full time at her homes in Kent, England, and the South of France, where she dreams up romances overlooking breath-taking views of the Mediterranean.
To date, Hannah has published three novels: Burning Embers, ‘romance like Hollywood used to make’, set in Kenya, 1970; the award-winning Echoes of Love, ‘an epic love story that is beautifully told’ set in turn-of-the-millennium Italy; and Indiscretion, her fieriest novel yet, set in 1950s Spain. 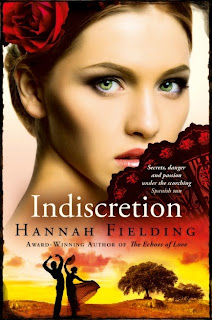 1950’s London. Alexandra, a young writer is bored of her suffocating but privileged life amongst the gilded balls and parties of Chelsea. Keen for an adventure, Alexandra travels to Spain to be reunited with her estranged Spanish family on a huge estate in Andalucía.
Arriving in sun-drenched southern Spain for the first time, Alexandra is soon caught up in the wild customs of the region. From bull fighting matadors and the mysterious Gypsy encampments in the grounds of the family’s estate, to the passionate dances of the region and the incredible horsemanship of the local caballeros, Alexandra is instantly seduced by the drama and passion of her new home.
When Alexandra inevitably falls for Salvador, the mercurial heir to her family’s estate and the region’s most eligible man, she finds herself entangled in a web of secrets, lies and indiscretion. Alexandra soon falls prey to scheming members of her own family, the jealousy of a beautiful marquésa and the predatory charms of a toreador, all intent on keeping the two lovers apart.
But nothing can prepare Alexandra for Salvador’s own dangerous liaisons with a dark-eyed Gypsy.
Can Alexandra trust that love will triumph, or will Salvador’s indiscretion be their undoing?


Hannah ~ welcome back to Jaffareadstoo and thank you for sharing news about your latest book, Indiscretion, with us....


Finding inspiration for my characters

Vivid, believable, engaging characters are essential in any book, but especially in a romance novel, I think. The reader needs to identify with the heroine, feel attracted to the hero and be riled up by the antagonist(s). Having written several novels now, I’ve honed a process for inspiring new characters to weave into my story worlds:

Research the setting for the book. Each of my books is set somewhere beautiful and culturally fascinating, and in a time gone by. In order to create characters who belong in the time and place, I have to immerse myself as far as possible in the setting. For example, for my new novel Indiscretion, I travelled to Spain and explored extensively, getting to know the hospitable, fun-loving, flamboyant people.

Search within. In all my female characters there is a little of me. There is much I like about them, but I also dislike some of their traits. The important thing to me is that they are not the stereotypical heroines and that they have their faults. They are human, which I hope makes them easier to relate to. For Indiscretion, I cast myself back to being a young woman, when I first struck out alone and travelled Europe. I remember well the mixture of excitement and trepidation I felt being the foreigner in new lands, and I channelled this memory into my character Alexandra, who has come to Spain after many years living in England. In addition, Alexandra is a romance novelist; I always wanted to create a character whose profession I know so well.

People-watch. Sometimes a person walking by will spark some inspiration in me. Paolo, my hero in The Echoes of Love, first wandered into my mind when I met an Italian lawyer who was the consummate gentleman, but somewhat tortured beneath the façade, I sensed; and Venetia, the heroine, looks like a lady I once saw in a Venice street.

Let the imagination take flight. Having immersed myself in the culture of a place, ideas flood my mind, and often shaping a character is a simple matter of letting the muse take over. In Indiscretion, for example, I have the character of Don Felipe, a bullfighter who exudes masculinity and is Salvador’s arch rival in the book. I’ve certainly never met a Felipe, but he walked into my imagination one day fully formed and I just knew he would set the cat among the pigeons!

However my characters form, each is very much alive for me. During the planning and writing phases of book creation I’m often to be found in something of a daydream – washing up or gardening in the real world while in my inner world I chat with my heroine or set a scene and watch it play out. This, for me, is the most fun in the writing process. What better job can there be than one in which you meet countless fascinating people and have a hand in shaping their destinies? I count myself very lucky indeed.

It's always a real pleasure to welcome her back to Jaffareadstoo.