Delighted to host a stop on today's Blog Tour stop

It isn't unusual for crop circles to appear overnight on Hackpen Hill. In this part of Wiltshire, where golden wheat fields stretch for miles, the locals have got used to discovering strange mathematical patterns stamped into the earth. But this time, it's different. Not only because this particular design of dramatic spiralling hexagons has never been seen before. But because of the dead body positioned precisely in the centre of the circle. DI Silas Hart of Swindon Police, is at a loss. Only Jim, a scientist at secretive government laboratory Porton Down, knows the chilling truth about the man on Hackpen Hill. And he wants Bella, a trainee journalist on her first ever story, to tell the world. But Silas has other ideas – and a boss intent on a cover up.
As Bella and Jim race against time, dark forces conspire against them, leading them to confront the reality of their own past and a world in which nothing is as it seems. An original, intelligent and twisty thriller set in rural Wiltshire. Can DI Silas Hart uncover the chilling truth before it's too late?
📖 My Thoughts..
Crop circles are in themselves a conundrum but when dead bodies start appearing in the centre of some remarkably complex circles, the search is on, not just to find out who is behind these heinous acts of violence but also to discover the meaning behind the intricate crop designs. DI Silas Hart of the Swindon police force is as perplexed by the crop circle designs as he is by the modus operandi of the perpetrator but he and his investigative team are determined to uncover the truth, even if means disturbing some of the more secretive activity which is going at at the government research facility at nearby Porton Down.
The story is understandably complex with some fascinating theories behind the manipulation of crop circles by those who want to leave specific messages, I found I had to concentrate on getting this information clear in my head before I could go onto the next part of the story. Running alongside the murder instigation is the added benefit of meeting Bella, a young Oxford graduate who is currently on her first assignment as a junior reporter, she desperately wants to make her mark on the world of investigative journalism but as the story progresses we realise that there is far more to Bella's fragile state of mind than we first expected.
Multi-layered and deeply complex, The Man on Hackpen Hill is a crime thriller which feels entirely original, and whilst rather dark in places, it definitely kept my attention, from the impact of its disturbing opening chapter, through to the final denouement, which was every bit as complex as the mystery at its core.
About the Author 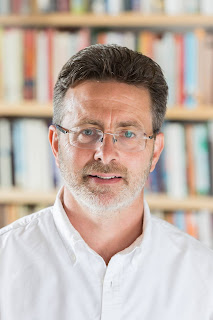 J.S. Monroe read English at Cambridge, worked as a foreign correspondent in Delhi, and was Weekend editor of the Daily Telegraph in London before becoming a full-time writer. His psychological thriller Find Me became a bestseller in 2017, and, under the name Jon Stock, he is also the author of five spy thrillers. He lives in Wiltshire, with his wife and children.
Twitter @JSThrillers #TheManOnHackpenHill
Website
@HoZ_Books 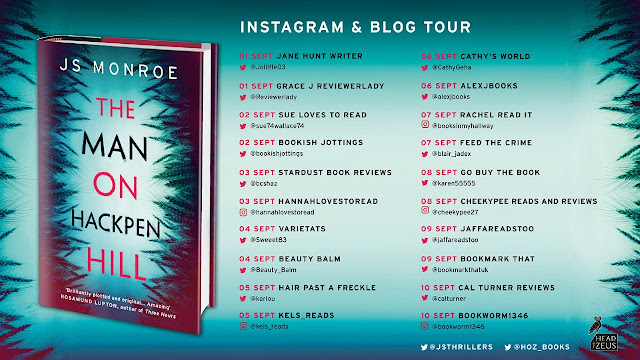