Blog Tour ~ The Storyteller of Casablanca by Fiona Valpy

Morocco, 1941. With France having fallen to Nazi occupation, twelve-year-old Josie has fled with her family to Casablanca, where they await safe passage to America. Life here is as intense as the sun, every sight, smell and sound overwhelming to the senses in a city filled with extraordinary characters. It’s a world away from the trouble back home—and Josie loves it.
Seventy years later, another new arrival in the intoxicating port city, Zoe, is struggling—with her marriage, her baby daughter and her new life as an expat in an unfamiliar place. But when she discovers a small wooden box and a diary from the 1940s beneath the floorboards of her daughter’s bedroom, Zoe enters the inner world of young Josie, who once looked out on the same view of the Atlantic Ocean, but who knew a very different Casablanca.
It’s not long before Zoe begins to see her adopted city through Josie’s eyes. But can a new perspective help her turn tragedy into hope, and find the comfort she needs to heal her broken heart
My thoughts..
This dual time story starts off with a real sense of time and place as all the heat and colourful atmosphere of modern day of Casablanca comes vibrantly to life. Zoe Harris is relatively new to Casablanca and we immediately start to see the city through her, rather uncertain, eyes as she tries to become accustomed to living in this strange new country. Whilst her husband is at work Zoe is left much to her own devices and she cuts something of a lost, and rather lonely, figure and with deepening cracks appearing in her already troubled marriage, she turns for comfort to the pages of an old journal that she found hidden beneath the floorboards of her baby's daughter's bedroom.
In 1941 during the momentous years of the Second World War, twelve-year old Josie Duval and her family have fled France and escaped to Casablanca to escape Nazi persecution. In Casablanca, they find a peace, of sorts, but although their diminishing wealth gives them a life of some comfort it is far from settled especially when Josie discovers that her family are being drawn into clandestine activity which places them all in grave danger.  In her journal, Josie shares her hopes and dreams, her love for books and storytelling, and her fears for her family's safety in a world which seems to be increasingly dangerous.
This is such a strong story which works perfectly well as a modern day look at a marriage which is going nowhere and where sadness is a barrier to future happiness, whilst at the same time bringing to life the fear, and confusion, of living through a time of great change, when danger lurked in hidden corners, and when deadly enemies were sometimes people who you knew well. I was equally absorbed in both time frames for although  Zoe and Josie are separated by age, time and circumstances reading Josie's journal gave Zoe the confidence to make changes to her own way of life. Josie found so much comfort in adding her private thoughts of what it was like to be in Casablanca during such a dangerous time.
Meticulously researched, The Storyteller of Casablanca a heartwarming, and absorbing, story by an author who truly knows how brings the past alive. The story combines an authentic sense of time and place and brings to life two fascinating female characters whose individual stories will remain with you long after the last page is turned.

Fiona Valpy spent seven years living in France, having moved there from the UK in 2007 before returning to live in Scotland. Her love of both these countries, their people and their histories, has found its way into the books she has written. She draws inspiration from the stories of strong women especially during the years of the Second World War, and her meticulous historical research enriches her writing with a wonderful sense of time and place. 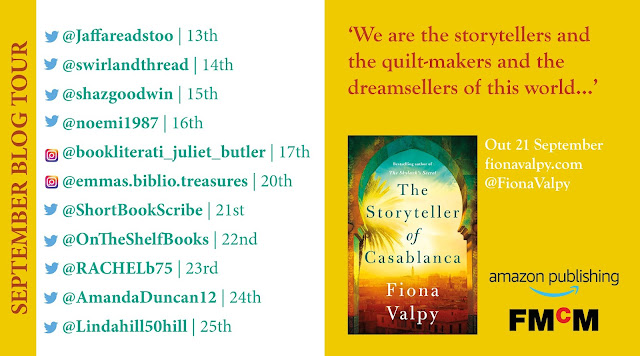