December, 1943.
As the war effort gathers steam in Europe, it's all hands on deck on the home front.
Gloria is over the moon to be reunited with her sweetheart Jack. But her sons Bobby and Gordon are away with the Navy and still know nothing of their mother's divorce and new half-sister.
Rosie's squad of welders must work gruelling hours in the yard as they prepare for the Allied invasion of Normandy. All the while Rosie herself waits anxiously for news of her husband Peter, who is carrying out dangerous work as an undercover operative in France.
Meanwhile welder Dorothy has a feeling that her beau Toby is planning to pop the question when he's next on leave. But it seems that her head is being turned by someone closer to home...

📖 My thoughts...
I never tire of this series and returning to the Sunderland shipyards in the company of the shipyard girls is like being reacquainted with old friends, and as we have come to expect there is never a dull moment for any of this stalwart group of women, who have bonded so well, and whose lives intertwine in an intimate, and supportive, way.
The story gets off to a dramatic start with the arrival of characters who have been out of the story for a while and whose very presence upsets the equilibrium of the lives of a couple of the women, especially Gloria and Dorothy. Running through this home front story are several threads which bring both happiness and heartbreak to some of the characters and there are a few unexpected twists and turns which help to add an interesting dimension to the way the story eventually plays out.
Whilst this tenth book is very much about what is happening in the North East in 1943/44, over in France preparations are underway for the D-Day landings, and in order to meet wartime demand extra pressure is being placed upon the shipyard workers to get vessels out in super quick time and everyone is working really hard. However, despite the pressure of work, the shipyard girls still make time for each other, helping out families, and friends, with their usual brand of no nonsense common sense. The author creates such a believable world that it’s easy to think you are sitting down in the canteen and sharing a pot of tea with the girls as they mull over the news of the day, and worry about their menfolk who are caught up in the war.
This enjoyable, and authentically researched, WW2 series is now firmly established, and with each successive story it just gets stronger and stronger. If you haven’t read any of The Shipyard Girls series, then my advice would be to start at the beginning, that way the characters, and their fascinating wartime experiences, will burrow their way into your heart.
About the Author 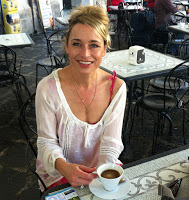 Nancy Revell is the pen name of writer and journalist Amanda Revell Walton, who has worked for the national press for the past 25 years, providing them with hard-hitting news stories and in-depth features. She has also worked for just about every woman’s magazine, writing amazing and inspirational true life stories.
Nancy Revell is spearheading a campaign to honour the real women of the Sunderland shipyards in her home town with a new public statue that will be displayed within the historic Sunderland Shipyards. Nancy has worked closely with the Sunderland City Council and the Sunderland Soroptimists, a worldwide volunteer service organization for women, and after putting out a call on her own social media channels, Nancy was approached by local artist Rosanne Robertson who has been commissioned to create the statue that will be unveiled later this year.
Sunderland boasted the largest shipyard in Europe during WWII, and produced a quarter of Britain's merchant shipping at the time. When the men went away to war, the courageous Shipyard Girls took up the back breaking work building ships for the British Navy. Due to its size, the Sunderland Shipyards were a key target of Hitler’s Blitzkreig, making the work not only backbreaking but incredibly dangerous. Historians have estimated that without the courageous women working in Sunderlands’ shipyards during the war, WWII could very likely have been lost due to lack of ability to transport troops, provisions and ammunition.
Follow the blog tour
Twitter @arevellwalton #ShipyardGirls
@arrowpublishing 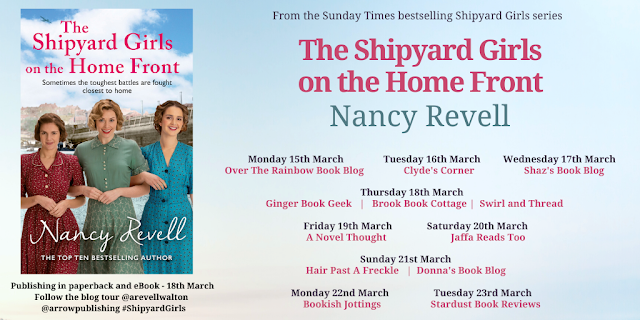