📖 Blog Tour ~ Let in the Light by Gerard Nugent

Delighted to host a stop on this blog tour

A feelgood story about love and music and the power of a single song.
Songwriter, Richie Carlisle never wanted to be famous.
After stumbling into the limelight five years ago, he soon found himself crashing back out of it. Now, he spends his days working in a small music shop in Edinburgh, attempting to live a quiet life as a part-time dad.
But his 15 minutes of fame have taken its toll. His inspiration for songwriting, music and life in general seems to have all but disappeared.
When Richie is given a flyer advertising the first meeting of the Hope Street Songwriters’ Circle, it’s a chance to step back into the world. But after years of hiding away, letting in the light won’t be easy,
📖 My Thoughts..
Richie Carlisle spends his days working in a small music shop in Edinburgh, quietly going about his life, which far from perfect, gives him something of a sense of stability. However, just occasionally, echoes of Richie's more successful past invades his privacy, and we go back to a time when music was in his heart and soul. Richie's association with music is special but for five years he has cut this out of his life, that is, until he is encouraged to once again take a chance and let in the light.
Let in the Light is a clever look at the vagaries of the music industry when the lure of fame can so easily prove to be a temptation which is hard to resist, however, as we discover throughout the story giving up a successful career brings it's own set of problems. By cleverly dividing the story into periods of now and then I had a real sense of  Edinburgh in the present time, along with a good impression of what was happening to Richie some five years before.
There's an ease to the writing which makes the story flow really well and I liked the way the story developed gradually so that we got a sense of, not just Richie's character, but also of those who helped to shape his life. I really enjoyed getting to know Richie, he's a likeable character, given to moments of introspection but, by and large, scraping by, trying to be a good son, and part-time father, and yet all the while we get the impression that there is something missing in his life.
Let in the Light is not just about the music, although it does feature quite strongly, it's also about being a good person, trying your best to deal with whatever life throws at you, and of the friends and family who are with you through good times, and bad. I've really enjoyed this debut novel and hope to see more of this author's stories in the future.
About the Author 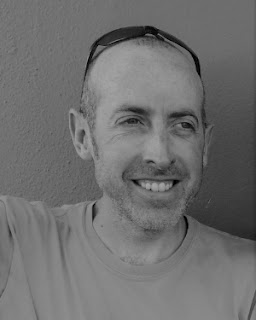 Gerard Nugent is a writer living in Yorkshire. 'Let in the Light' is his debut novel, although he has been writing songs for years. Gerard was born and raised in Edinburgh, Scotland. He moved to England in his 20s and worked in various northern towns before settling in beautiful Yorkshire with his family and two guinea pigs. In 2019, he attended a writing class to help him generate ideas for further songwriting, but, instead, started writing a novel.
From the 29th March and throughout April the book is on special promotion and is available for 99p from Amazon UK
Profits from the book will be going to Health in Mind - an Edinburgh based charity that creates awareness of mental health and well being within communities. Find out more about the charity by clicking here
The YouTube trailer for the eBook can be viewed by clicking here 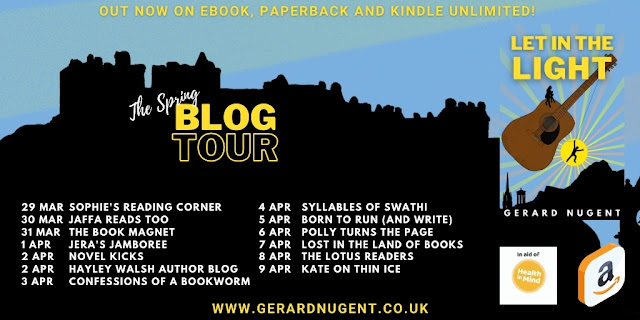