Delighted to share my book review on this blog tour

Santa Cruz 1953. Jean-Luc thought he had left it all behind. The scar on his face a small price to pay for surviving the horrors of Nazi occupation. Now, he has a new life in California, a family. He never expected the past to come knocking on his door.
Paris 1944. A young woman's future is torn away in a heartbeat. Herded on to a train bound for Auschwitz, in an act of desperation she entrusts her most precious possession to a stranger. All she has left now is hope. On a darkened platform two destinies become entangled. Their choice will change the future in ways neither could have imagined. Beginning on an ordinary day and ending on an extraordinary one, WHILE PARIS SLEPT is an unforgettable read.

📖 My Thoughts..
The story opens in 1953 and introduces us to Jean-Luc Beauchamp, his wife Charlotte, and their young son, Sam. This close knit family want nothing more than to settle down to a new life in America which is a world away from their life in Paris during the tumultuous years of the German occupation during WW2.
Moving effortlessly between time frames we first get to know Jean-Luc in 1944 when he is forcibly made to maintain the railway system at Bobigny, a nightmare place, where overnight, as Paris sleeps, cattle trucks leave the station crammed with Jews on their way to the transit camp at Drancy. Distressed by everything he witnesses, Jean-Luc is determined to do whatever he can to thwart this deadly exodus but the dreadful circumstances he witnesses don't lend themselves to interference. However, a chance meeting with Charlotte de la Villy, and a desperate request from a Jewish stranger, will change the course of Jean-Luc's life forever.
The story is based on factual evidence of what was happening in Paris during the occupation and with emotional clarity a poignant story of distress, desperation and danger starts to emerge. The time frame moves seamlessly and I was as just as engrossed in what what was happening to the Beauchamps in America as I was with the second thread of the story that of a Jewish couple in Paris who have a very special reason for being part of the story. With impeccable research the author brings a real authentic sense of history and gives her characters such strong personalities that they leap off the page and into the room with you as you read, you feel their despair, particularly in the latter part of the story which is emotionally difficult to read without succumbing to tears.
Whilst Paris Slept is a sensitively written and emotionally heart-wrenching story about the strength of survival and the desperation of selfless courage.
About the Author 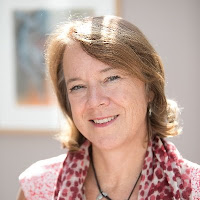 Ruth Druart grew up on the Isle of Wight, moving away at the age of eighteen to study psychology at Leicester University. She has lived in Paris since 1993, where she has followed a career in teaching. She has recently taken a sabbatical, so that she can follow her dream of writing full-time.
Twitter @RuthDruart #WhileParisSlept
@headlinepg
@RandomTTours 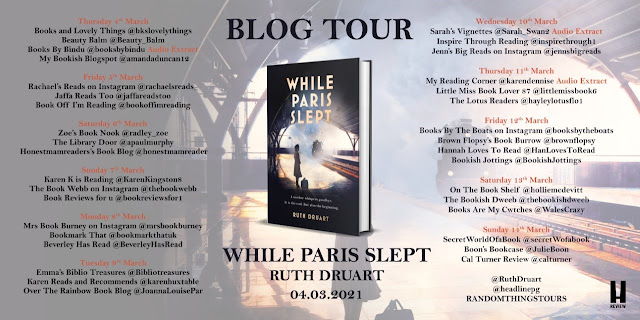