Escape the rat race by heading to the Yorkshire Moors in Jane Lovering’s funny, warm and magical new novel.
Needing an escape, Dora swapped city living for life as a shepherdess on her grandad’s Yorkshire farm. More than a decade later Dora is still there, now farming the fifty acres and caring for the one hundred rare sheep by herself. She never hears the call of the city, but instead relishes the peace and simplicity of life on the Moors.
When Dora’s glamorous but quarrelsome sister Cass, her teenage nephew Thor and his handsome tutor Nat, turn up for an unexpected and unreasonably long stay, life on the farm is thrown into chaos. Cass brings with her unwelcome memories from the past, and of someone who once stole Dora's heart.
Dora takes refuge in the comforting routine of the farm, the sheep never allowing her too much time to dwell. But, as the seasons change, the snow starts to melt, and as lambs begin to fill the fields, Dora can’t keep hiding in the hills. Because even though she’s trying, Dora can’t run away from a love that never really let her go...
📖 My thoughts,,
When unexpected guests arrive at Folly Farm right in the middle of lambing season, farmer, Dora isn't very impressed, especially as these guests aren't entirely welcome. Dora and her sister Cass are totally different in character, neither one complimenting the other, and the addition of Cass's pre-teenage son, Thor, and his handsome tutor, Nat, doesn't exactly make life any easier for Dora.
What then follows is an interesting, and funny, family story about how this unusual quartet learn to tolerate each other, and even though Dora is still not sure about sharing her home space with them, she does start to mellow, and I think that's what makes this such a lovely story to read. I thought it would be all about angst and arguments but the author cleverly allows each of the characters to have their own space so that we come to appreciate them as individuals.
Home on Folly Farm has a lovely pastoral setting in Yorkshire and I came to love those sections which had Dora tending to her flock of rare breed sheep and all the trials and tribulations of running a farm when finances are threatened, and the horror of sheep rustlers who are targeting lonely, rural farms. Equally, I enjoyed getting to know more about Cass and Thor, who start off as proper townies only to succumb to the magic of Folly Farm. My favourite, and perhaps the most enigmatic character, is Nat whose past is about to catch up with him in the most unexpected of circumstances.
Home on Folly Farm is a beautifully written, and totally engaging read, and although it covers some quite dark issues, it has, at its core, a lovely heartwarming story about the quirkiness of family, the love of the countryside, and the possibility of a second chance at love. 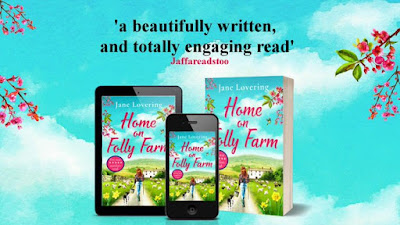 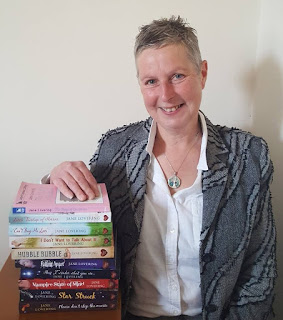 Jane Lovering is the bestselling and award-winning romantic comedy writer who won the RNA Novel of the Year Award in 2012 with Please Don’t Stop the Music. She lives in Yorkshire and has a cat and a bonkers terrier, as well as five children who have now left home. 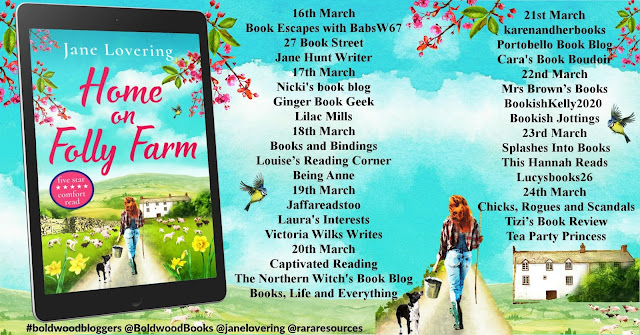