📖 Blog Tour ~ How to Save Your Own Life by Erica Jong

Hailed as one of the ninety-nine best novels published in English since 1939 by Anthony Burgess, How to Save Your Own Life is the daring sequel to Fear of Flying republished in time for International Women’s Day 2021.
Three years after the events of Fear of Flying, we catch up with Isadora Wing. With two marriages and a bestseller in her wake, Isadora finds herself in sunny California and the hedonistic Hollywood. From grief and betrayal to jealousy and trust, Jong explores the ways in which a marriage unravels. In the end, Isadora must learn to save herself.
📖 My Thoughts..
We first met Isadora Wing in Erica Jong's, now iconic novel, Fear of Flying, which was first published in 1973, with How to Save Your Own Life following in 1977. There is no doubt that, at the time, both novels were controversial with their focus on feminism and female sexuality.
Reissued with a new cover, How to Save Your Own Life takes us on Isadora's quest to rid herself of a tiresome marriage. That Isadora is dissatisfied with her life is obvious, her angst and chagrin at her literary career and her search to find out more about herself is what comes across in this journey to save her own life. I found Isadora Wing to be an unusual protagonist, she's not always particularly likeable, nor are some of the other characters, but there is a vulnerability to Isadora which I didn't expect to find. She is a woman of strong contrasts, who seems to lurch from one crisis to another, and though she's both hedonistic and, at times, morally reprehensible, there's an originality to her which is hard, in the end, not to find interesting.
That the story is of its time is perhaps what comes across strongly, and whilst it is still readable for a modern audience, it's not for those who are offended by explicit sexual references.  How to Save Your Own Life is, I think, quite definitely a classic book, and with its companion, Fear of Flying, both novels are now firmly placed in history as controversial novels which encouraged a generation of women to search for sexual freedom, a world away from the stereotypical confines of what was expected of them in the 1970s as wives and mothers.

Erica Jong is an American writer famously known for her debut novel, Fear of Flying. Published in 1973, it revolutionised conventional beliefs about women, marriage, and sexuality. Erica created an outlet for every woman’s inner voice, and her frank discussions of sex and sexuality has made her one of the the world’s most iconic writers. With her work being published in 45 languages worldwide, Erica Jong is a hero to millions. Since beginning with Fear of Flying, Erica has published over 25 books spanning fiction, non-fiction, and poetry.
Twitter @ericajong #HowToSaveYourOwnLife
@AgoraBooksLDN
#InternationalWomensDay 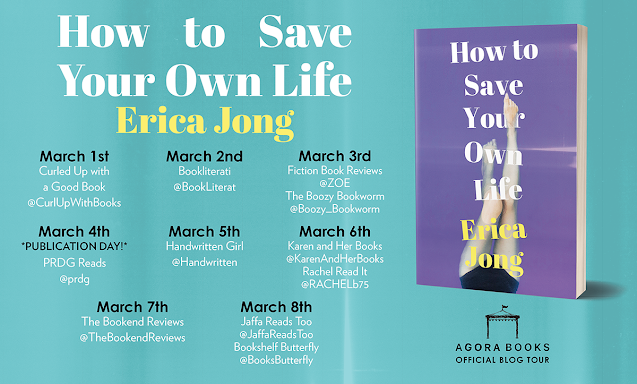