One summer morning, a flight takes off from New York to Los Angeles. There are 187 passengers aboard: among them a Wall Street millionaire; a young woman taking a pregnancy test in the airplane toilet; a soldier returning from Afghanistan; and two beleaguered parents moving across the country with their adolescent sons. When the plane suddenly crashes in a field in Colorado, the younger of these boys, 12-year-old Edward Adler, is the sole survivor.

Dear Edward recounts the stories of the passengers aboard that flight as it hurtles toward its fateful end, and depicts Edward's life in the crash's aftermath as he tries to make sense of the loss of his family, the strangeness of his sudden fame, and the meaning of his survival. As Edward comes of age against the backdrop of sudden tragedy, he must confront one of life's most profound questions: how do we make the most of the time we are given?

There’s a real sense of impending doom as you start to read Dear Edward as it’s known right from the start that the aeroplane journey isn’t going to end well, and yet there’s a feeing of intimacy as the passengers on board the flight from NewYork to Los Angeles become, over the course of the story, as familiar as friends.

The eponymous Edward of the story is only twelve years old when he has the dubious distinction of being the sole survivor of the air disaster. The story takes us, with meticulous precision, through the long, slow road of Edward's recovery and subsequent rehabilitation, which is harrowing and painful, and filled with grief, confusion and sorrow. Throughout the story the impact of Edward’s struggle to come to terms with what has happened never fails to connect on an emotional level.

I devoured Dear Edward in just a couple of sittings as I didn’t want to put the book down so I carried it from room to room just so I could squeeze in extra reading time when I really should have been doing something else. It’s poetic, powerful, beautifully observed, it made me laugh in places where I didn’t think I should laugh, and it also made me cry in places where the sadness was huge.

By the end of this special story I wanted everything in Edward’s world to be better and brighter to make up for a loss so great it threatened, at times, to engulf him.

Recommended: Absolutely ✅ it’s already a contender on my ‘books of the year’ list.

Ann Napolitano is the author of the novels A Good Hard Look and Within Arm's Reach. She is also the Assistant Editor of One Story literary magazine. She received an MFA from New York University; she has taught fiction writing for Brooklyn College's MFA program, New York University's School of Continuing and Professional Studies and for Gotham Writers' Workshop. She lives in Brooklyn with her husband and two children. 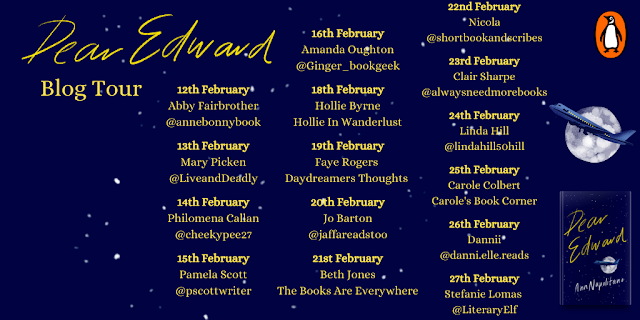