One early October afternoon, ten-year-old Jacob Rossi begins the short walk home from school. But he never makes it.

Days later, DCI Anna Tate is called to the scene of a burning building, where an awful discovery has been made. A body has been found, and the label in his school blazer reads: J. Rossi.

As Anna starts digging, she soon learns that a lot of people had grudges against the boy’s father. But would any of them go so far as to take his son?

And is the boy’s abductor closer than she thinks?

I've followed this crime series from the beginning and with each successive story the series just gets better and better. It's now such a real treat to join again with DCI Anna Tate and her team of investigative officers.

In Little Boy Lost we catch up with Anna as she is coming to terms with some big changes in her life, the reasons for which were revealed in the previous book, so I won't go into detail for those who haven't read book #2 At Your Door. However, crime doesn't stop and Anna is called back to duty after her compassionate leave when she is asked to investigate a complex case of a missing schoolboy. With the suspense cranked up to high, Anna and her team have a race against time to find out just what is going on with the abduction case whilst at the same time getting drawn into the complications of a series of extremely violent riots which are taking place simultaneously in London. Add limited resources and a shortage of detectives into the mix and the whole case suddenly becomes a good deal more complicated.

I was soon gripped by the complexity of the plot as the story gets off to a dramatic start, and as the action continues at fast and furious pace no stone is left unturned and no small clue is left uninvestigated.  It's quite a dark story in places, and certainly doeesn't shy away from the grimier side of life, and yet the author does a great job of tempering the grittiness of the story alongside the human interest and I was especially gripped by, Anna’s daughter, Chloe’s story as she inadvertently gets drawn into the terrible events which are happening in London.

There is no doubt that this is fast becoming one of my favourite crime investigation series and I think that Little Boy Lost is my favourite of this author's books to date. Filled with twists and turns, thrills and spills, the story grabs your attention right from the very start and doesn't let you imagination go until a wowser of an ending which leaves you definitely wanting more 😊

Recommended ✅ Definitely, it's a big yes from me. 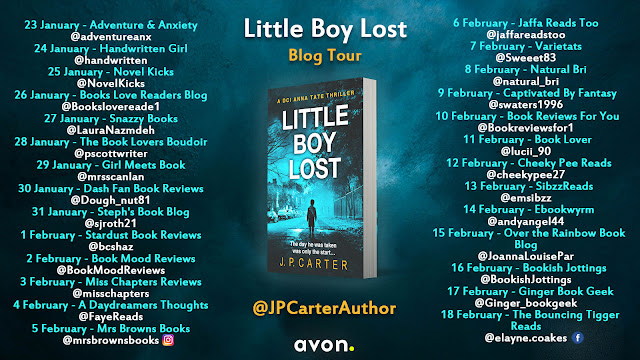