Blog Tour ~ The Photographer of the Lost by Caroline Scott

...Until she knows her husband’s fate, she cannot decide her own...

An epic debut novel of forbidden love, loss, and the shattered hearts left behind in the wake of World War I

1921. Families are desperately trying to piece together the fragments of their broken lives. While many survivors of the Great War have been reunited with their loved ones, Edie’s husband Francis has not come home. He is considered ‘missing in action’, but when Edie receives a mysterious photograph taken by Francis in the post, hope flares. And so she beings to search.

Harry, Francis’s brother, fought alongside him. He too longs for Francis to be alive, so they can forgive each other for the last things they ever said. Both brothers shared a love of photography and it is that which brings Harry back to the Western Front. Hired by grieving families to photograph gravesites, as he travels through battle-scarred France gathering news for British wives and mothers, Harry also searches for evidence of his brother.

And as Harry and Edie’s paths converge, they get closer to a startling truth.


I was really excited about this book when I read the blurb and saw the proof copy when it arrived from the publishers. I always seem know when a book is going to be rather special, it's that indefinable 'something' which speaks to me from seeing and touching the cover. 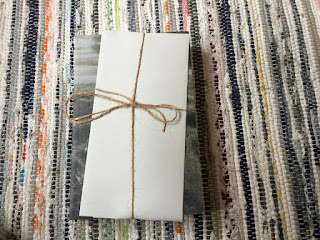 The Photographer of the Lost starts in 1921, in the aftermath of the First World War, as those relatives who are bewildered by loss cling to any conceivable hope that their loved ones, who are amongst the many hundreds of thousands who are still missing, may, by some miracle, still be found alive. Those who have been to the battlefields of Northern Europe will understand the sheer size of the war cemeteries and can therefore imagine just how traumatic it must have been, in the chaotic aftermath of war, when grieving relatives desperate for something to focus their grief, clutched at absolutely anything in order to gain even a modicum of comfort.

From the start of the story we are introduced to Edie, whose  husband, Francis is amongst the missing, and also to Harry, himself a war survivor, and also Francis' brother, who is now using his considerable skill as a photographer to travel around the grave sites and battlefields of northern France and Belgium, taking photographs, in the hope of bringing comfort to those who are grieving beyond measure.

I'm purposely not spoiling this novel by recounting any detail as that would do the author a great disservice, as the story, not published until October, deserves to be read without any spoilers from me. However, it's safe to say that I was absolutely fascinated by the author's ability to bring such a poignant period in history alive with such emotional detail, and switching as it does between two different time frames, not only brings the events of WW1 into focus, but also adds a poignant reminder of those lives which were lost in dreadful circumstances but were never forgotten by those who stayed at home and waited.

And that is really where the remarkable strength of this novel lies, and I started by saying that just holding the proof copy suggested to me that this book was about to be rather special, and now that I've been privileged to read an early copy I am even more convinced that The Photographer of the Lost is very special indeed.

And now, thanks to the kind permission of the publishers I can the share the stunning book cover today.

Caroline Scott is a freelance writer and historian specializing in WWI and women’s history. The Photographer of the Lost is partially inspired by her family history.


Thanks to the generosity of publishers I can give away a beautiful proof copy of
The Photographer of the Lost to one lucky UK winner. 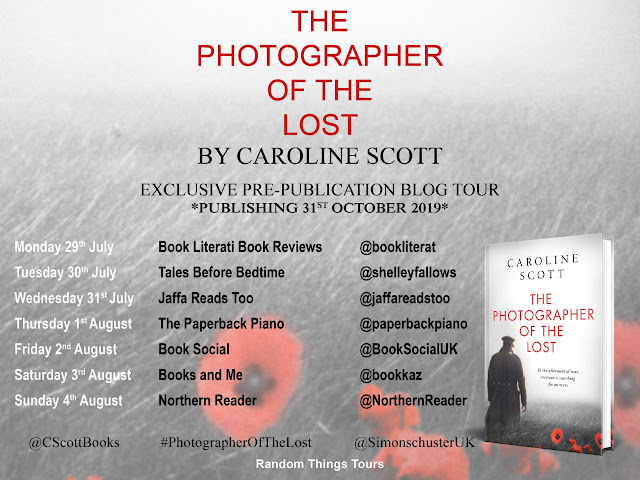