Betty Wellows dreams of settling down to an ordinary life in the little fishing village of Hallsands in  Devon with her husband. But when he returns broken and haunted from the Great War, she finds herself persecuted by his distraught mother - and yearns to escape. It is only when a storm devastates the village that Betty sees her chance.

Fleeing to Bristol and changing her name to Mabel Brook, she seeks a new life - only to discover destiny has other plans. Penniless and alone, Mabel suffers a brutal attack before being rescued by a psychic named Nora Nightingale. She gets her first taste of communications from the dead and realizes she may have this power herself. But Mabel fears her gift may be a terrible curse as it becomes ever harder to hide from the truth about who she once was - and the tragic life she left behind. Then, one day an all too real message from her past appears and Mabel is forced back to the very place she has escaped. A place of heartbreak, and perhaps even murder, she must confront her actions one last time in order to secure any hope of a future.

Gripping, exhilarating and ever suspenseful, Lesley Pearse's You'll Never See Me Again is a tale of one woman's fight to escape her past and find her destiny.

The novel's dramatic opening chapter sets the scene for this latest historical saga by one of my favourite authors. Betty Wellows can only dream of the life she had before her young husband was tragically damaged whilst fighting in the Great War. His return home, suffering with shell shock, means that Betty must move in with her harridan of a mother in law who makes Betty's life a complete misery even to sending Betty out in a violent storm. At the end of her tether Betty decides to use the advantage of the storm to disappear and start a new life under an assumed name, and it is this new life as Mabel Brook which forms the heart of the story.

I loved getting to know to know Mabel, she is a very resilient young woman and despite several hardships she makes the best of every situation she finds herself caught up in. This is what this author does so well, she brings alive characters who, over the course of the story, you get to know and love. I really wanted everything to work out for Mabel as she deserves a happy and settled life, but, of course, she has to work through some pretty tough situations before the ending becomes clear.

The author is the absolute queen of the historical saga and writes with such love and passion that every book she delivers is filled with an abundance of rich and varied characters and each story succeeds in delighting her audience of loyal readers. You'll Never See Me Again has everything that this author does so well, a strong female lead character, an authentic historical background and more than a hint of intrigue, danger and compassion. I loved it ♡


You’ll Never See Me Again by Lesley Pearse is out now, published by Michael Joseph, priced £20 in hardback.

Lesley Pearse is a global No.1 bestseller with fans across the world and sales of over 10 million copies of her books to date. One of the nation’s best-loved storytellers, Lesley is a master of the gripping story line, always introducing her readers to characters that are impossible not to care about or forget. With a ‘Lesley Pearse’ book purchased every 4 minutes in the UK, there is no formula to her books or easily defined genre and, whether historical drama like her No.1 bestselling Belle trilogy or the emotionally powerful Trust Me based on the true-life scandal of British child migrants sent to Australia in the post-war period, she always engages the reader completely.You’ll Never See Me Again is Lesley’s 27th novel.

Lesley Pearse was told as a child that she had too much imagination for her own good. She left home at 15 and headed to London where she worked her way through many jobs – from corsetry sales in Cooks of St. Pauls (featured in Dead to Me), to musician’s muse (her second husband was a musician managed by Don Arden) to bunny girl to nanny; from gift shop owner to dressmaker – finally finding her true vocation when she became a published author age 49. Since then Lesley has become an internationally bestselling author, with over 10 million copies of her books sold worldwide.

A true storyteller and a master of gripping storylines, there is no set formula for a Lesley Pearse novel although strong heroines and difficult circumstances are pervasive. Whether historical adventures such as Gypsy or Never Look Back or the passionately emotive Trust Me, Lesley is inspired by stories of courage and adversity and often gives voice to women lost in history and people damaged by their childhood experiences. She is passionate about her research and her stories have taken her far and wide; from Alaska to the Crimea. Lesley now lives in Torquay in Devon where she loves to spend time walking on the beach with her grandchildren and dogs. A fantastic speaker and committed and passionate fundraiser for the NSPCC, Lesley is a much sought-after guest at literary lunches, library events and festivals up and down the country. 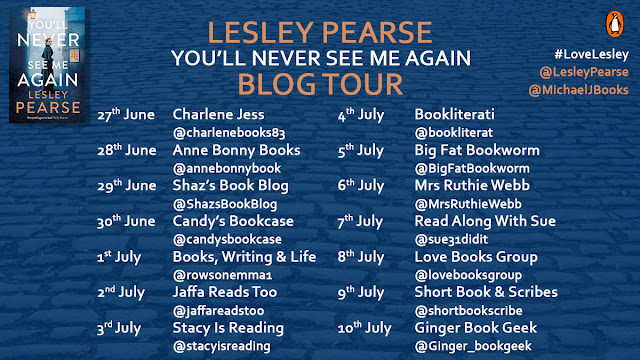