A terrorist attack has just hit a busy railway station. Jake Winter was the British intelligence officer in charge of stopping the attack and now his career, and his conscience, are in freefall...

Jake's next anti-terror operation has to be a success. He has got himself a new source - a young British Asian man, Rashid, recently returned, apparently disillusioned, from battle, who he hopes is the key to foiling the next attack and to getting Jake to the leader of the network. But is Rashid really working for British intelligence, or has Jake put his faith in the wrong man once again?

A Fatal Game is the story of an organization, and a single man, in a state of panic. And panic is the last thing you need when you're playing a game like this...


It's testament to the sign of our times when this glimpse into the mindset of a terrorist organisation, both from the insider dealings of the terrorists and also from those who seek to protect the public from harm, is such a fascinating and timely read.

When a surveillance goes horribly wrong, Jake Winter, a British intelligence officer, feels the full force of public condemnation but with a heightened sense of danger comes an obligation to get it absolutely right next time. Using contacts within a terrorist organisation is a brave and determined move but is not without considerable danger and it is this dangerous aspect which is explored in detail. A Fatal Game is one of those stories in which you're never quite sure who is working for whom, or indeed if any of the undercover operatives are truly what they seem, and therein lies the strength of the novel and is what kept me guessing until the end.

The author writes well and maintains a high level of tension throughout the story without compromising on the believability in the way the plot unfolds.  Reading of the author's background of working in intelligence for many years, it's obvious throughout the novel that he is writing about what he knows and he does so without ever seeking to over sensationalise the after effects of a terrorist attack and always with a keen sensitivity for those people who may have been caught up in such an atrocity in real life.

To say too much about the plot would give far too much away, as this, like all suspense stories, is best read without any spoilers, and in keeping it that way, the full force of the ending will impact on you as much as it did to me.

A Fatal Game out now and is published by Viking.

Nicholas Searle is the author of three novels. His first novel, The Good Liar was a Sunday Times bestseller and was shortlisted for the CWA John Creasey New Blood Dagger for the best debut crime novel. Before becoming an writer, Nicholas worked in British intelligence for more than twenty five years, he lives in Yorkshire. 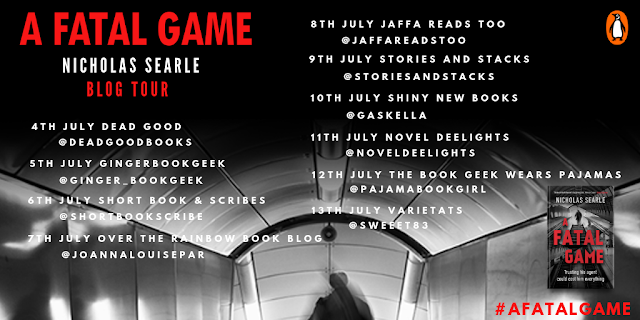