Let's go back to ....Arthurian Britain

Set in a 5th century Britain besieged by invading bands of Saxons and Franks, Irish and Picts, Giles Kristian's epic new novel tells - in Lancelot's own words - the story of the most revered yet reviled of all Arthur's knights, the warrior who fought at his lord's side - yet stole his wife. This is the story of one of the great figures of British myth and legend - a story ready to be re-imagined for our times.

The myths and legends of our isles and islands form the backdrop to our history and there is no legend finer that that of Lancelot, King Arthur and Guinevere. Born in Gaul, son of King Ban and Queen Elaine, Lancelot and his family are forced to flee following the destruction of their court by the villainous, King Claudas. However, for Ban's straggling court taking refuge is no guarantee of safety and Lancelot soon discovers that his life is about to take a very different turn. His association with the Lady Nimue and his first introduction to the druid, Merlin, is done with fine attention to detail both in using what is known in legend, and also by describing realistically what it may have been like to grow to maturity in 5th century Britain, when marauding Saxons, Franks and Picts were constant sources of danger.

There's a sense, right from the start of the story, that Lancelot is bound for greatness and the author takes us through Lancelot's progression from green boy, to glorious knight, with such a perfect eye for detail that the rich appreciation of this warrior knight's contribution to the mythology of our landscape is embedded with every word.

I was quickly drawn into the story and mesmerized by the richness of the historical detail which is wonderfully descriptive and yet, there's also a magical lyricism to the language which reflects the storytelling ability of those troubadours who sat in smoky halls recounting tall tales of forgotten lands and brave warriors. What emerges, in sublime detail, is a complete picture of Lancelot, the man of legend, who grew from frightened boy, into a man of worth, and whose love for a beautiful and captivating woman would eventually bring down a kingdom.

There is no doubt that the author is absolutely at the top of his game and continually brings history alive in stunning detail. It is my belief that Lancelot is one of his strongest books to date and I don't say that lightly, as I still think that his novel The Bleeding Land about the English Civil War is one of the best historical novels I have read on that difficult subject, and yet, in terms of emotional connection and bringing complicated mythology to life, Lancelot surpasses everything I thought I knew about the Arthurian legend. It's brilliant and bold, strong and tender, and re-imagined so beautifully that you feel as if you have stepped back in time with Arthurian Britain opened up to scrutiny and with Lancelot's destiny as painful and as poignant as ever. 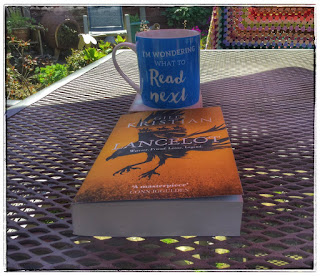 Family history (he is half Norwegian) and a passion for the fiction of Bernard Cornwell inspired the author to write. His best selling trilogies 'Raven' and the 'Rise of Sigurd' have been acclaimed by his peers, reviewers and readers alike. The novels The Bleeding Land and Brothers' Fury tell the story of a family torn apart by the English Civil War and he co-wrote Wilbur Smith's No.1 best seller,Golden Lion. With Lancelot Giles plunges into the rich and swirling waters of our greatest islands 'history': the Arthurian legend. Giles Kristian lives in Leicestershire.