Chrissie, Roxanne, Carly and Anita, an eighties pop sensation outselling and out-classing their competition. Until it all comes to an abrupt end and three of their careers are over, and so is their friendship.

Thirty years later, their old record label wants the band back together for a huge money-making concert. But the wounds are deep and some need this gig more than others.

In those decades apart life was far from the dream they were living as a member of The Thunder Girls. Breakdowns, bankruptcy, addiction and divorce were a constant part of their lives. They’ve been to hell and back, and some are still there.

Can the past be laid to rest for a price, or is there more to this reunion than any of them could possibly know? Whilst they all hunger for a taste of success a second time around, someone is plotting their downfall in the deadliest way possible...

We've all seen those pop bands who do well only to then split up, with one going solo and the rest left to try to eke out some sort of living once the limelight has faded. That's what happens to The Thunder Girls at the start of the story and then we push forward 30 years to discover what's happened to them in the intervening years, just as their old record label try to entice them back together for one last concert.

This is a really fun read about the music industry, about what goes on behind the scenes, and of the maneuverings, shenanigans and downright back-biting between the four women who collectively make up The Thunder Girls. I enjoyed getting know Chrissie, Roxanne, Carly and Anita, some, I have to say that I liked more than others, but I think that's where the charm of the book lies, in that you won't like all of them, but the author does a great job of bringing the characters to life in a such a entertaining way that you can't help but be drawn into their story.

I'm not going to say anything about what happens over the course of the story except to say that I was gripped from the first page and read the book more or less in one sitting as I couldn't wait to see what would happen next to Chrissie, Roxanne, Carly and Anita. I have to say though, that parts of the story made my jaw drop,  other parts made me laugh out loud, and there's a dinner part get-together which had me in fits of giggles, and yet, there are also parts of the story which are quite poignant and rather emotional. By the end of the novel I was cheering for The Thunder Girls and hoped that everything would work out for all of them 😊

The Thunder Girls is a real blockbuster of a summer read by an author who knows the music industry like the back of her hand and who brings a lively enthusiasm to this her debut novel. 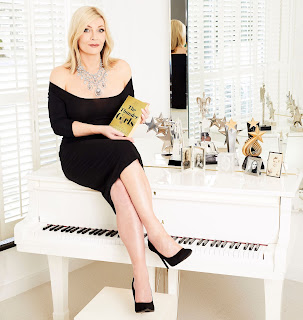 Melanie Blake is an author, playwright and a former music manager. She is head agent at Urban Associates. The Thunder Girls has been adapted for the stage and will have its world premiere at the Lowry Theatre in Salford this September. Melanie Blake lives in London. 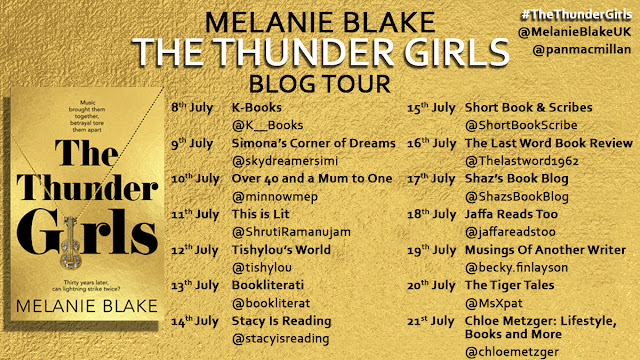