Imagine turning up to your own party, and recognising no one. Your best friend has just created your worst nightmare.

Louisa is an exhausted, sleep-deprived new mother and, approaching her fortieth birthday, the very last thing she wants to do is celebrate.

But when her best friend Tiff organises a surprise party, inviting the entire list of Lou’s Facebook friends, she’s faced with a new source of anxiety altogether: a room full of old college classmates who she hasn’t spoken to in twenty years.

And one person in particular she never expected to see again is there – her ex-boyfriend from college, the handsome and charismatic Oliver Dunmore. When Oliver’s wife Melissa goes missing after the party, everyone remembers what happened that night differently. It could be the alcohol, but it seems more than one person has something to hide.

Louisa is determined to find the truth about what happened to Melissa. But just how far does she need to look…?

Not everyone loves a surprise party, and for Louisa, celebrating her 40th birthday is not a priority as she's also a sleep deprived new mum. Struggling to adjust to motherhood despite having a teenage daughter, Louisa just wants to sleep rather than party, but her husband and best friend think a party will help to boost her mood. However, the party brings Louisa into contact with lots of her Facebook friends she doesn't really know and also brings an unexpected reunion with her ex-boyfriend Oliver which opens up a hole heap of secrets that Louisa would rather have kept buried.

I enjoyed the rather slow build up of the story so that we get to know more about Louisa, and also about her best friend, Tiff, who seems to be supportive one minute, and then secretive the next. Louisa is something of an enigma and her bouts of anxiety and episodes of amnesia add an interesting aspect to the story. However, I think that this is one of those complex suspense stories where in places you have to suspend belief, especially towards the end of the novel which I felt opened up more questions than answers, and as there is more than one unreliable narrator you are never quite sure if the truth is being told by any of them 😉

The Missing Wife is an interesting psychological suspense story, and the author adds enough twists and turns to keep you guessing. Even though there were times when I had to stop and consider would someone really do that, overall, the story kept entertained from start to finish.

Sam Carrington lives in Devon with her husband and three children. She worked for the NHS for 15 years, during which time she qualified as a nurse. Following the completion of a Psychology degree she went to work for the prison service as an Offending Behaviour Facilitator.

Her experiences within this field inspired her writing. She left the service to spend time with her family and to follow her dream of being a novelist. 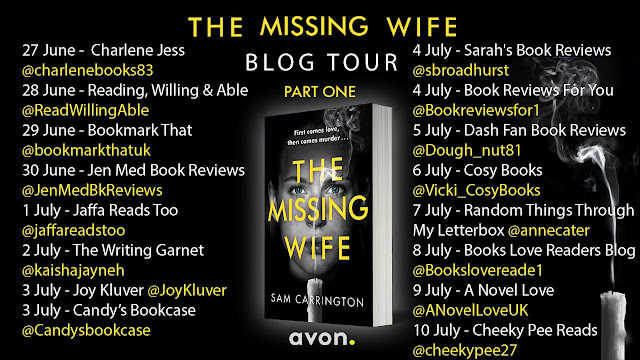