Karl Drinkwater is originally from Manchester but has lived in Wales for nearly twenty years, ever since he went there to do a degree: it was easier to stay than to catch a train back. His longest career was in librarianship (twenty-five years); his shortest was industrial welding (one week).

Sometimes he writes about life and love; sometimes death and decay. He usually flips a coin in the morning, or checks the weather, and decides based on that. His aim is to tell a good story, regardless of genre. When he is not writing or editing he loves exercise, guitars, computer games, board games, the natural environment, animals, social justice and zombies

Is a person shaped by the place they grew up? If so, and assuming writers count as people (a truth not universally acknowledged), then we’re bound to find out more about a writer when we look at their past. Even a random sample of dates could be informative.

I usually talk about my early childhood. But let’s start later than that. What about my teenage years? Two memories spring to mind.

1. I was the non-conformist class comedian rebelling against authority at Urmston Grammar School. It was a boy’s school so I didn’t know anything about girls until I first fell in love at 16. Maybe that’s why I write about relationships a lot now.

2. After my father died it made me the man of the house. I kept a hatchet under my pillow, something school friends didn’t believe until I showed them. I explained that if a burglar tried to climb into mine or my sister’s bedrooms I’d cut his fingers off. Maybe that’s why I write about darkness a lot now.

That’s me, I’m just like everyone else: half romantic, half obsessed with apocalyptic survival. It’s a comfortable mix. But maybe my teenage years explain why I write in two genres, that thing writers are told they MUST NEVER DO. (Oh, I sometimes got in trouble at school, so you can add rule-breaker to that list. Only got caned once though.)

Although my thriller/horror writing gets most publicity (Turner, Harvest Festival, They Move Below), my last two literary novels were set in Manchester in the year 2000, often around the city centre. They’re Cold Fusion 2000 and 2000 Tunes, and I see them as love letters to Manchester: its music, its city, its people, whilst also being critical of some aspects. And they’re also more traditional love stories, after a fashion, about nerds and difficult people being able to find love and happiness and contentment. Shades of my own life sneaking in there again – impossible to separate the work from the worker. 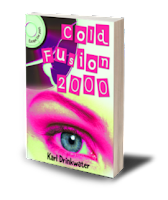 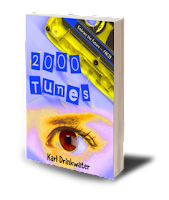 The novels are concerned with place and how it shapes us, particularly in 2000 Tunes where the character of Mark gradually perceives the city of Manchester as switching from being a supportive home to being a prison of memory and lost glory. Only the promise of a new place can offer the chance to change behaviours and start again.

Both novels have many scenes set in the city centre (as it existed in 2000): often the same places and themes, but with different outcomes. Cold Fusion 2000 can be particularly tricksy. It was fun for me as a writer to play with reader expectations and assumptions, even if the ending comes as a surprise that requires re-evaluating what went before. That plot twist is an exception: I normally think of these two literary novels as being more character- and theme-focussed than plot-focussed, which makes it too measured for some readers, but compellingly believable for others.

Manchester is the home of many social movements. It’s where The Vegetarian Society started. I liked that radical and questioning side to it (and went vegan when I was at South Trafford College). I also loved the frequently down-to-earth nature of the people, at least where I lived. If you had any pretensions you were told to “shove them up yer arse”. It prevented you getting too big for your boots.

Obviously there are downsides to the city – like everywhere else, we’re seeing loss of green spaces, litter, urban blight. The little green park in Urmston where I used to sit in and eat my lunch got turned into a two-storey car park. The field I walked past on my way to work is now covered in houses. Piccadilly Gardens was once all flowers and bushes; it got concreted over; then they eventually stuck a token bit of turf on top of that (along with extra concrete walls to make it look like a prison). As a child I lived in a house by some fields; then the diggers moved in and widened the motorway until it almost touched our back garden and I had trouble sleeping (and then doing well at school) because of the continuous traffic. Independent shops replaced with supermarkets; cafes with Starbucks and Costa. Progress? The impact of globalisation, and its footprint of making everywhere the same, hits as hard in Manchester as anywhere else. 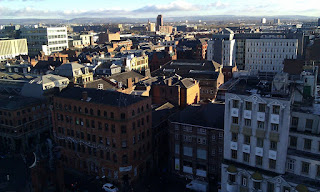 But sometimes the bad is something to rebel against. And even then, it shapes us.

Huge thanks to Karl for kicking off my Close to Home feature and for sharing his thoughts about Manchester so eloquently.

You can find out more about Karl and his writing by clicking on the links below:

I hope that you have enjoyed reading today's Close to Home feature.