England is in crisis. King Edward has no heir and promises never to produce one. There are no obvious successors available to replace him, but quite a few claimants are eager to take the crown. While power struggles break out between the various factions at court, enemies abroad plot to make England their own. There are raids across the borders with Wales and Scotland. Harold Godwinson, Earl of Wessex, is seen by many as the one man who can bring stability to the kingdom. He has powerful friends and two women who love him, but he has enemies who will stop at nothing to gain power. As 1066 begins, England heads for an uncertain future. It seems even the heavens are against Harold. Intelligent and courageous, can Harold forge his own destiny - or does he have to bow to what fates impose

On this 950th anniversary of the Battle of Hasting, there can be few people who don't recognise the year date of the battle - 1066, but, perhaps, there are less people who know that it took place on the 14th October, or of the finer details behind the lead up to the battle and indeed, of what made the usurper, William, Duke of Normandy into the Conqueror we think we know today. In 1066 What Fates Impose, the author GK Holloway goes a long way into fleshing out the personality of those characters who played a major role in the years leading up to 1066, whilst at the same time highlighting  the political ramifications of that most significant of years.

The novel starts with an ending and King William I's death in 1087, sweat soaked and putrid with fever, the man we know as the conqueror takes stock of his life, a life which has been made ever more complicated in the pursuit of power and glory and of the inevitable haunting which, in his final few hours, racks his fevered mind.

What then follows is a complex and beautifully written story about Anglo-Saxon / European politics. It’s about the minutiae of life at the English court and of the ill-fated marriage between King Edward and Queen Edith. It’s also about the perceptiveness of the Godwinson’s, an ambitious family, who on recognising the feebleness of the King, made momentous decisions which would have dramatic consequences in the years leading up to, and including, 1066.

There is no doubt that the author has done his research well, and by cleverly blending historical fact with fiction, this Dark Age truly comes alive in the imagination. There is a distinct feel of authenticity to the story, so much so, that it really feels like you are immersed in the life and culture of eleventh century England. It becomes impossible to read the novel without the imagery of candle lit sconces flickering in the cold and of the dangers lurking in creeping shadows.

Overall, 1066 What Fates Impose is a multifaceted story, which is both delicately and intricately woven around the events leading up to that momentous autumn day in 1066. It is the story of the historical movers and shakers who were instrumental in the success of the Norman Conquest and who would, without doubt, be influential in the shaping of England for the next millennium.

Best Read With...chunks of roasted meat and a cup of hot wine, rich with the tang of berries..


Please return tomorrow on the 950th Anniversary the Battle of Hastings to read an interview with the author and the chance to win your own special signed copy of 1066 What Fates Impose..

My thanks to the author for sharing his novel with me. 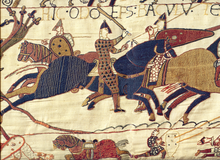