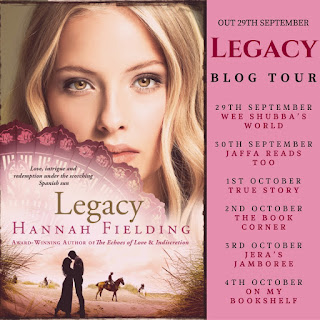 I am excited to be able to share an extract from Hannah's latest novel, Legacy

The epic love story reaches its dramatic conclusion in Legacy, Book 3 of the Andalucían Nights trilogy. Love, intrigue and redemption under the scorching Spanish sun… A troubled young journalist goes undercover in Spain, and finds her loyalties tested when love and desire unearth secrets she hadn’t bargained for. Can love survive family legacies of feuding and tragedy, and rise like the phoenix from the ashes of the past? Legacy is a story of truth, dreams and desire. But in a world of secrets you need to be careful what you wish for...

"......Luna hesitated, pondering whether to go off in search of it. It wasn’t part of her plan. The distant frenzied notes vibrated on the night air, sending a delicious hum through her body. She had been to a few flamenco shows in Las Vegas and in other parts of the US, but had always wanted to see a live show in Spain. The sensible voice inside her head told her that she would have plenty of opportunity to see flamenco over the coming months, and that it was foolish to follow a whim when she should be getting back to the hotel, but right at that moment Luna was tempted to give in to her curiosity and follow the sound. In fact, something stronger than curiosity beckoned, something more alluring and seductive, that seemed to stir her soul – a call of enchantment drifting through the night air. In answer, she stepped quickly into the alleyway.

The sinuous passage was paved with cobblestones and was badly lit. It was empty, save for a few couples that stood in the shadows, absorbed in each other. Both sides were lined with the colourful façades and beautiful wrought-iron balconies of secretive houses, their drawn-down persianas and wooden doors jealously guarding the lives of their owners. Luna wondered about the hidden inhabitants, just as she had done a few years back when gliding in a gondola past the magnificent but eerie shuttered palaces of Venice. Here, just as in the streets of the Gothic quarter, the air was laden with fascinating smells; this time the piquant aroma of cooking mingled with wood smoke and the ozone of the sea.

With rising anticipation, and ignoring her better judgement, Luna moved along the narrow lane into deeper darkness. The distant music and the rhythmic clapping and tapping of feet came to her in waves; sometimes it seemed nearer, then farther away. A cat crept noiselessly out of the shadows, making her jump, and flashed its phosphorescent eyes before scampering away and disappearing into the small, gated entrance of one of the houses. Suddenly she was aware of the sound of her footsteps on the cobblestones and she felt a frisson of fear. She knew she was being reckless by persevering down this maze of dark alleys but, having gone so far now, she was not about to turn back.

Unexpectedly, at an abrupt bend in the narrow street, the sound of live, full-blooded flamenco music burst out once more, echoing through the night. It came from a nightclub a few yards away, its façade painted with warm sunny colours under the flashing fluorescent sign El Cabo de Oro.
Now, as she approached the tavern, Luna could clearly hear the loud clapping of hands, the olés, and the clinking of glasses. She hesitated outside the bright walls a few moments longer, a curtain of beads the only thing separating her from the exuberant sounds of the show.

Finally, she pushed it aside and went down the few steps leading into the dimly lit room below. Anti-smoking campaigns had obviously not reached this wild little world, she noted, engulfed by the hazy atmosphere.

Here, the cuadro flamenco sat in a semicircle on a platform at the far end of the room with that part open to the night sky. The troupe played its music at a fast tempo, while the audience clapped their hands and stamped their feet in rhythm on the tiled floor with cries of olé to encourage the young dancer. A girl was singing hoarsely, seductively, and her castanets marked their own syncopated rhythm.

Lamps on the red painted walls threw out a warm amber glow, illuminating an assortment of bullfighting posters, advertisements, and photographs of toreros and flamenco dancers.

On one side, to the right, stood a long, wooden bar lined with endless bottles of different shapes and colours and topped by a row of gleaming glasses. Tended by a scraggy-looking waiter chewing a quid of tobacco, most of the clientele sat on cane stools along the bar, eating tapas or drinking around low tables made from empty wine barrels. To the left of the stage, an arched roof opened out on to a walled patio, where small number of people sat drinking and chatting in the balmy evening air.

Luna made her way deeper into the room, looking for a table nearer the patio where she would be less affected by the fug of smoke. The tavern was packed. The audience was mostly men and what women there were, were all accompanied. Luna was the only single woman in the place, and it made her feel uncomfortable. She began to regret her rash decision. Back in New York she had never been to a bar alone, so why had she suddenly decided it was a good idea to do so on her first night in Barcelona? Her pale blonde hair and pearly complexion caused her to stand out starkly against the darker colouring of the Spaniards who filled the club.

There was a drop in the level of noise as she became an object of interest. Men’s eyes were drawn to her like a magnet. Some of them whispered to each other, casting sidelong glances. Women also stared, their eyes narrowing, reflecting quite a different sentiment altogether. The cuadro had stopped playing while the musicians sipped their wine and a new dancer emerged from the background to take over the lead. Luna stood at the side of the seated audience and glanced around. Maybe I should go back, she thought, feeling distinctly out of place.

And then it happened …" 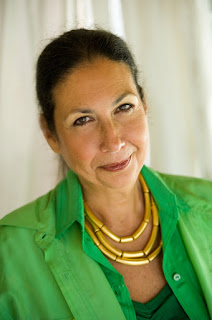 Huge thanks to the author for allowing me to share this extract with you and to Alice at Midas for the kind invitation to be part of this blog tour.

And for one lucky UK winner I have a copy of Legacy to giveaway.