Jaffareadstoo is delighted to be part of the Jacques Blog Tour 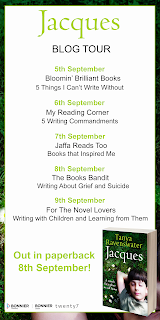 And here's the author Tanya Ravenswater to tell us all about the Books that have inspired her. 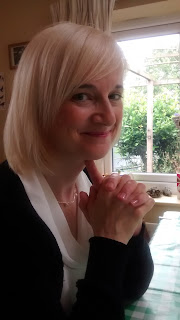 Books that have inspired me

As the daughter of a teacher of English who, so the story went in his home town, had swallowed a dictionary in his early years, it was no real surprise that I was born with an appetite for words. I was lucky to be pointed towards some good books and also encouraged to read anything I chose for pure enjoyment. Both my parents read regularly aloud to us - books such as The Wind in the Willows, The Chronicles of Narnia, Charlotte’s Web, The Hobbit. First memorable borrowings from the local library included those perfectly child-sized illustrated Beatrix Potter books, traditional fairy tales, Alice in Wonderland, A Bear Called Paddington, Heidi, Black Beauty. In those days before Enid Blyton’s stories were criticised for being politically incorrect, I was a Famous Five and a Secret Seven addict. Enid’s stories were full of details that then completely held my interest, portraying worlds of independent people around my age, enjoying being together outdoors, solving crimes and investigating mysteries. For simiIar reasons, I consumed the entire Malcolm Saville’s Lone Pine series. Comics and girls’ magazines were almost better than chocolate. While I guessed they might not have been such mind-enhancing reads, I was especially lured in by a cringeable but fascinating ‘problem page’!

From my teens on, in and out of school, I was inspired by classics including Watership Down, Tom Sawyer, Little Women, Jane Eyre, Pride and Prejudice, Great Expectations, Mill on the Floss and Orwell’s Nineteen-Eighty Four. I particularly loved the voices of Thomas Hardy and D.H. Lawrence, their rendering of characters, relationships and awareness of forces of Nature, especially in novels such as Sons and Lovers and Far From The Madding Crowd.

When I went on to study languages at university, I read a range of novels in French and Spanish and in translation. Among the most memorable were Gabriel Garcia Marquez’s Love in the Time of Cholera and Flaubert’s poignant Madame Bovary in its evocation of a woman driven and ultimately destroyed by her own romantic dreams. I was also very struck by existentialist works, Sartre’s La Nausée and Camus’ L’Étranger, engaged by the serious intellectual commitment of such writers to exploring the meaning of individual life, their fearlessness in confronting ‘darker’, less comfortable themes such as alienation, angst and personal responsibility.

From my twenties onwards, my reading has been pretty eclectic and it’s a challenge to select what’s most inspired me. I think if you’re a writer most, if not all, of the books you’ve read are going to have some influence, even if it’s to remind you what makes you want to skim rather than get their every word. Increasingly I’ve looked for books with a substantial psychological element, moving, serious as well as darkly humorous voices. Stories with guts, unpretentiously told. And I have an abiding pleasure in well written romantic fiction.

Steinbeck is of course a story-telling genius. There’s confidence and fluency in his voice, as well as such humility and compassion. His novels have an incomparable sense of place, a masterful holding of the dark and light. Of Mice and Of Men is one of my favourites.

Among other top novels on my personal list would have to be: The Lonely Passion of Judith Hearne by Northern Irish Brian Moore, Chocolat by Joanne Harris, the Rebus series by Ian Rankin, Trick or Treat by Lesley Glaister, Ian McEwan’s On Chesil Beach, the work of Deborah Moggach and Tracey Chevalier. There’s a lot more titles inevitably coming into my head as I sign off here. But then, life’s short and I should let you get on with your own reading!

This is the story of Jacques Lafitte, a young French boy who is orphaned and torn away from everything he knows. Forced to move to England to live with his guardian – the proud and distant Oliver Clark – Jacques find himself alone in a strange country, and a strange world.

As years go by, Jacques becomes part of the Clark family and learns to love life again.

But then his feelings for Rebecca – Oliver’s daughter – become stronger.

For fans of Boyhood, Jacques is a moving and unique coming-of-age story about one boy’s struggle to find his place in the world.

Tanya Ravenswater was born in County Down, Northern Ireland. She first graduated in modern languages from St Andrews University. She has worked as a nurse, in bereavement support and counselling education. With a love of words since childhood, inspired by Nature and fascinated by the diversity of inner worlds and relationships, Tanya writes fiction and poetry for adults and children. She has published a collection of short stories for women, and has also been short-listed and published in the Cheshire Prize anthologies. Her children’s poem, Badger, was the winner of the 2014-15 Cheshire Prize for Literature.


Huge thanks to Tanya for this fascinating guest post and to Carmen at Bonnier Zaffre for the kind invitation to be part of this lovely blog tour.

Do take a look at the other stops on the tour for more exciting content. 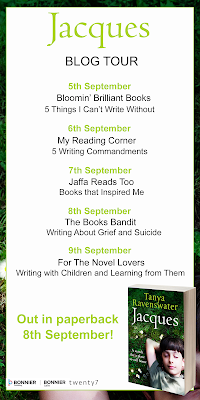