I am delighted to welcome the author of White Feathers 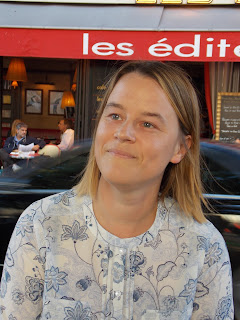 White Feathers – a Problem For Feminists?

“She shouldn’t have done it.”

That was the point-blank reaction of my “Finish Your Novel” course tutor when I told him the plot of my book. Specifically, his reaction to hearing about the terrible choice protagonist Eva is forced to make when war breaks out and Christopher, the man she loves, refuses to enlist. Her stepsister Grace is very critical of his behaviour and insists that Eva present him with a white feather – a symbol of his cowardice intended to force him to join the war effort.

That Eva’s back is against the wall, that she genuinely feels her blood sister’s life is at stake: all this did not alter my tutor’s opinion one jot. His reaction was immediate. And to my mind understandable. His empathy was with the men who were shamed into fighting a war they wanted no part of.

Mutatis mutandis, let us turn to Downton Abbey, where a gaggle of women bearing white feathers show up at an event and get turned away by an angry Lord Grantham. Not before Branson, the Irish chauffeur, brandishes a few, remarking cheerfully “I got loads.” Haha, all a bit of a joke, really.

Presentist nonsense. The white feather was no joke. It could often be a death warrant.

When I first started researching, I came across Francis Beckett’s account of what happened to his grandfather:

He had three small daughters, which saved him from conscription…But in 1916, as he walked home to south London from his office, a woman gave him a white feather…He enlisted the next day. By that time, they cared nothing for short sight. They just wanted a body to stop a shell, which Rifleman James Cutmore duly did in February 1918, dying of his wounds on March 28. (Source)

Ninety years later, Beckett, seething with anger, details exactly what effect that strange woman’s action had on his family: the prolonged death of his grandfather and the anguish of his mother’s recollections towards the end of her life. It was clear he had forgiven nothing.

As I worked on the storylines of Eva, caught in the middle of a nasty family struggle, and Christopher, resolved to keep a promise to his beloved older brother, I came across other real life accounts. An English friend told me of a woman who came to speak at her school, a descendant of a family of devout Quakers. One of her ancestors was a young man whose fiancée had no truck with his stance as a conscientious objector and shamed him with a white feather. He went to the Front, refused to take up arms against his fellow man, and was immediately killed in battle. Again, the speaker made it clear that her family had never forgiven the fiancée.

So who were they, the women who did this? Women who would never be compelled to take up arms acting with such destructive malice against men of principle?

The answer is complex because it covers a poisonous intersection between the early feminist movement and government-backed propaganda. The women who gave white feathers were both suffragettes and anti-suffragettes. The Active Service League, co-founded by Admiral Charles Fitzgerald and the prominent anti-feminist Mrs Humphry Ward, were in full accord with the main suffragist organisation, the Women’s Social and Political Union, on this matter. In the scene featuring Mrs Ward in the book, she praises Emmeline Pankhurst for organising her followers in a mass white-feathering session outside the Opera House on September 8th, 1914. I am able to provide a precise date for this event because it actually happened.

This legacy is awkward for feminists. In a review of a book by Kate Adie in the Guardian in 2013, the reviewer mentions that Adie considers the white feather movement “a landmark event in women’s liberation”, quoting the veteran war reporter as saying “The government actually addressed them directly for the first time, asking them to send their sons and their husbands to war. This moved women's status up a notch.” (Source)

I get it that women were disenfranchised, had no rights and were treated as men’s property. When Eva’s friend Sybil receives a letter from her husband seeking a divorce, she is rightly anxious about her future status even though she has no affection for the man. It is also true that women were manipulated by the Asquith government – the relentless bombardment of posters with slogans saying “What did you do in the war, Daddy?” and “Women of England, is Your Best Boy Wearing Khaki?” is insidious, a slow drip-drip-drip of erosion of trust and confidence in their men. I also know from reading Rilla of Ingleside how strong feeling was against of anyone of a pacifist bent. From my vantage point in 2014 it horrified me to read such opinions as those expressed by Rilla and her family, but I cannot gainsay them.

All that said, I don’t think the heartbreaking situation that couples like Eva and Christopher had to face moved anyone’s “status up a notch”. I see no liberation in it. I see nothing positive in it at all.

“She shouldn’t have done it,” my tutor said. And Eva would fully agree with him. 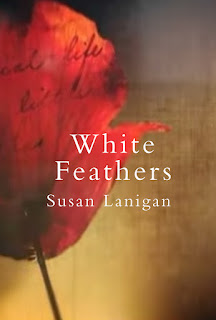 Two lives in danger - her lover's and her sister's. But she must choose only one.

In 1913, young Irish emigrant Eva Downey is trapped in London with a remote father and hostile stepmother. When she is awarded a legacy from an old suffragette to attend a finishing school in Kent, she jumps at the chance. At the school, she finds kinship and later falls in love with her teacher Christopher Shandlin, her intellectual equal.

But when war breaks out and the man she loves refuses to fight, Eva's fanatical stepsister Grace pushes her to make a choice. She must present him with a white feather of cowardice, or no money will be given for her sister Imelda's life-saving treatment in Switzerland. Caught in a dilemma, Eva must choose - and her decision will have irrevocable consequences for her and Christopher and haunt her for the rest of her life.

My review of White Feathers can be found here. 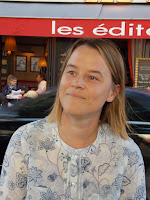 Huge thanks to Susan for giving such an insight into the symbolic use of White Feathers during the First World War.