Sometimes references to WW1 pop up in the most surprising of places but the reference is all the more poignant because it is so unexpected.

So, yesterday I was food shopping in Booths supermarket in Burscough, Lancashire when I spotted a brand of my favourite Lancashire cheese made by the excellent
Grandma Singleton's 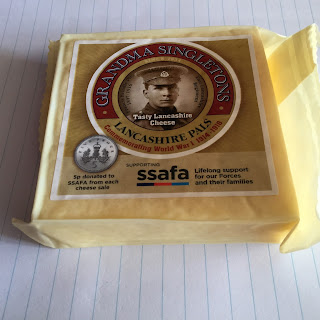 Featured on the cheese packet is Francis Brindle who enlisted on 15th September 1914, joining the Chorley Pals Company of the East Lancashire Regiment. He was killed, aged twenty, on the 1st July 1916, which was the first day of the Battle of the Somme. He has no known resting place, but is honoured, along with many others on the Thiepval Memorial to the Missing of the Somme.

The Thiepval Memorial has the names of 72,194 officers and men of the United Kingdom and South Africa and of these, over 90% died during the 1916 Battles of the Somme, between July and November.

The Pals battalions of World War I were groups of men who had enlisted in local recruitment drives. The promise that they would all be ‘in it together’ was an incentive for communities to send whole groups of their young men to fight on the western front. Hence the term ‘pals ‘was created. However, as the war started to take its toil, all too poignantly whole communities lost many of their brightest stars.

The Battle of the Somme

On the morning of the 1st July, and in less than 20 minutes, 235 of the 720 men from the 11th East Lancashire Regiment were killed and many died were they fell in No Man’s Land. A further 350 were wounded, of which 17 would later die from their wounds.

In total 31 men from The Chorley Pals (Y Company) were killed and three died within a month of their wounds received on that day.

21 of them have no known graves – Francis Brindle is one of these men.


I see this memorial whenever I go to Chorley and I always stop and give a silent prayer of thanks for the sacrifices the Chorley Pals made so that we could have peace and now thanks to buying a packet of my favourite Lancashire cheese I now have a name...