The War Poets of WW1

Geoffrey Studdert Kennedy MC (1883 -1929) was an ordained Anglican priest and poet.
He was one of nine children, born in Leeds, educated at Leeds Grammar School and later at University College, Dublin, where he gained a Classics and Divinity degree. 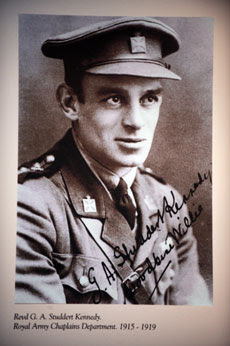 During WW1, he volunteered as a chaplain on the Western Front and helped  as a stretcher bearer. He  was given the nickname of "Woodbine Willie" because of his habit of giving Woodbine cigarettes, along with spiritual comfort, to the dying soldiers.

He once said .."a chaplain needed a box of fags in your haversack, and a great deal of love in your heart.."

He was awarded the Military Cross at Messines Ridge after running into no-man's land during an attack by the German front line.

This is his Military Cross citation...

For conspicuous gallantry and devotion to duty. He showed the greatest courage and disregard for his own safety in attending to the wounded under heavy fire. He searched shell holes for our own and enemy wounded, assisting them to the dressing station, and his cheerfulness and endurance had a splendid effect upon all ranks in the front line trenches, which he constantly visited.

Easy does it — bit o' trench 'ere,
Mind that blinkin' bit o' wire,
There's a shell 'ole on your left there,
Lift 'im up a little 'igher.
Stick it, lad, ye'll soon be there now,
Want to rest 'ere for a while?
Let 'im dahn then — gently — gently,
There ye are, lad. That's the style.
Want a drink, mate? 'Ere's my bottle,
Lift 'is 'ead up for 'im, Jack,
Put my tunic underneath 'im,
'Ow's that, chummy? That's the tack!
Guess we'd better make a start now,
Ready for another spell?
Best be goin', we won't 'urt ye,
But 'e might just start to shell.
Are ye right, mate? Off we goes then.
That's well over on the right,
Gawd Almighty, that's a near 'un!
'Old your end up good and tight,
Never mind, lad, you're for Blighty,
Mind this rotten bit o' board.

We'll soon 'ave ye tucked in bed, lad,
'Opes ye gets to my old ward.
No more war for you, my 'earty,
This'll get ye well away,
Twelve good months in dear old Blighty,
Twelve good months if you're a day,
M.O.'s got a bit o' something
What'll stop that blarsted pain.
'Ere's a rotten bit o' ground, mate,
Lift up 'igher — up again,
Wish 'e'd stop 'is blarsted shellin'
Makes it rotten for the lad.
When a feller's been and got it,
It affec's 'im twice as bad.
'Ow's it goin' now then, sonny?
'Ere's that narrow bit o' trench,
Careful, mate, there's some dead Jerries,
Lawd Almighty, what a stench!
'Ere we are now, stretcher-case, boys,
Bring him aht a cup o' tea!
Inasmuch as ye have done it
Ye have done it unto Me.