The author in my spotlight is ...Kirsten McKenzie 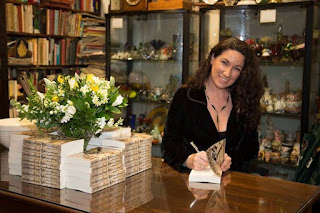 Kirsten is talking about her debut novel

Hello Kirsten and welcome to Jaffareadstoo...


Where did you get the first flash of inspiration for your novel, Fifteen Postcards?

I was sorting through an ice cream container full of old postcards which I'd found out in the back room of the shop. Mixed in the cards were a series of numbered postcards a soldier had written to his mother in WWI. Every time I tried sorting them into chronological order, someone would come into the shop, and I'd had to put them aside. They were essentially the beginning of 'Fifteen Postcards'. I only wish I knew whether the soldier survived.

The shop in Fifteen Postcards, The Old Curiosity Shop, is loosely based on Antique Alley, the antique shop my father started in 1971. The description of the front window, the shop counter, the aisles, is what I see everyday I'm at work. And yes, it really is that messy and disorganised.

If you are familiar with Charles Dickens' novel The Old Curiosity Shop, you'll recognise some crossover of character names, which I've sprinkled through Fifteen Postcards.

The descriptions of the antiques in Fifteen Postcards, are all based on articles which really exist. I've pinned images of most of them to my Pinterest board. It is astonishing the worth of some articles which were everyday items to some segments of society in days gone by. The only exception are the Paul de Lamere candleabra. While he was a prolific silversmith, records of his work were lost, so the candleabra in Fifteen Postcards are based on silverware owned by Queen Elizabeth II which were made by him, and pieces of his held in the V&A in London.

In your research for Fifteen Postcards did you discover anything which surprised you?

The population in both Simla in India, and in Bruce Bay in New Zealand. For the times, they really were bustling towns. Simla (or Shimla now) is of course a large town with plenty of tourists and university students, but Bruce Bay has long emptied of most of its inhabitants, and nature once again reigns supreme.

Fifteen Postcards is a Time Slip novel   - how did you control the narrative, or did the narrative ever control you?

It very much controlled me. It sounds peculiar to tell people that I had no idea what was going to happen with the story, but the slightest interesting thing which came across the counter at work, or something I read for research, could easily send me off on a tangent neither I nor my characters expected!

There was a point during the editing process though, when I realised I've left a relatively important character standing on the side of the road in India. Poor man. I had to then weave him back into the story, which is just as well as he plays a very important role in the next book.

What do you hope readers will take away from your novel?

That everything was once loved and desired. Everything you see in an antique shop was once new, and desired, by someone. I guess that goes for people too. That old man at the bus stop, was once young and vibrant. Take the time to talk to him, because you never know his story. Everything old has a history behind it, and that history can be fascinating.

What can we look forward to next ?

You can look forward to walking beside Sarah as she continues on her quest to be reunited with her parents. Will Warden William Price find her? What revenge will Richard Grey seek? I'm two thirds of the way through writing the next installment, so hopefully I can figure out how its going to end soon...

My thanks to Kirsten for taking the time answer our questions and to Accent Press for my copy of Fifteen Postcards.