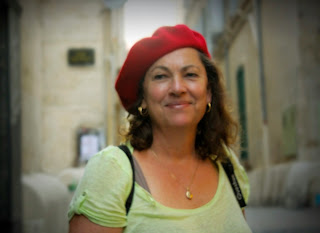 Liza grew up in Wollongong, Australia, where she worked as a general nurse and midwife for fifteen years.
When she met her French husband on a Bangkok bus, she moved to France, where she has been living with her husband and three children for twenty years. She works part-time as a French-English medical translator, and as a novelist.
Since completing a creative writing course twelve years ago, several of her short stories have won awards, notably the Writers Bureau annual competition of 2004 and her stories have been published widely in anthologies and small press magazines. Her articles on French culture and tradition have been published in international magazines such as France Magazine, France Today and The Good Life France.


Spirit of Lost Angels is the first in her French historical trilogy, The Bone Angel Series. The second – Wolfsangel – was published in October, 2013, and the third, Blood Rose Angel, will be published in November, 2015.

She is a founding member of the author collective, Triskele Books and reviews books for BookMuse.

I am really thrilled that to get us in the mood for her new novel, Liza is very kindly sharing a tantalizing extract from  Blood Rose Angel.

The outlaw looked on the birth scene with obvious surprise. A scowl darkened his grimy, sweat-slick face. ‘Christ drowning in merde. What the …?’ He stepped inside, a stench of smoked fish and old ale filling the room, the horsewhip he brandished in one shovel-like hand making unearthly cracks.

Despite the fearsome display, and the sword in his scabbard, a reckless courage flared inside me.

‘Get out,’ I ordered, jabbing a finger at the door. ‘Can’t you see this is a birthing room … a sacred place for women only?’

The outlaw glowered down at me. ‘Bit bold for a woman, aren’t you? Who might you be?’

‘I’m the midwife, and I order you out of this cot now!’ A drop of sweat rolled down my nose.

The room remained silent, save the outlaw’s bellows-like panting, and the ragged breaths of the women and Nica’s boys. The man’s gaze flickered sideways, locked on the newborn. He stepped towards Alix and her baby. ‘What’s wrong with its head?’

‘Looks like the head of the Devil itself.’ The outlaw laid his whip over the baby’s brow, stroking the tender skin with the tip, as if caressing a kitten. ‘Such a monstrous thing don’t deserve to live.’ His scarred face puckered into a grin that could have melted stone.

The new mother shrank away, whimpering and clutching her son to her breast.

‘Don’t hurt that newborn,’ I said, ‘or God will see you straight to Hell.’

The outlaw turned his crooked stare on me. In a movement more deft than a slaughterer’s knife, he wrenched the babe from Alix’s grasp. Jerking the newborn free of his swaddling, he held the bawling child upside down by the ankles.

As the infant screamed, writhing like a trout snagged fresh from the Vionne, the outlaw eyed the cot wall beside him. My insides seized with sudden terror.

Oh Lord no! Blessed Virgin save him.

‘Stop,’ I said. ‘Give me that child.’ I began rocking my angel pendant back and forth before the brigand, stepping towards him until I was level with the black hairs unfurling from his tunic. His eyes widened, fixed on the talisman’s glowing blue and green ones.

I knew the newborn’s life––probably all our lives––depended on not showing him fear. As a woman who’d lived without a man at her hearth for almost two years, I’d learned that terror only fuelled such lawless beasts.

With the soft, low voice I’d used to sing my daughter to sleep, I said, ‘If you don’t hand me the baby, and leave this cottage right now, a pack of wolves will pounce on you as you sit around the fire with your friends, boasting the spoils of Lucie. They’ll rip out your black heart and feed it to the Devil.’

Blood Rose Angel has been longlisted in the MsLexia Novel Competition, 2015

Thanks to Liza's generosity

Here is an amazing giveaway opportunity for up to 3 lucky winners.

Huge thanks to Liza for giving so generously of her time and for providing this fabulous giveaway.