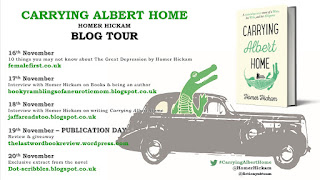 It's with great pleasure I introduce the author - Homer Hickam 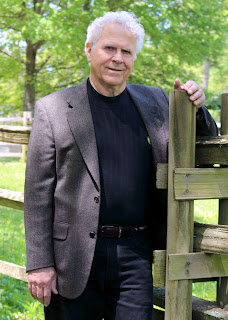 
This is the somewhat true story of a woman, a husband and her alligator.

Elsie Lavender and Homer Hickam were classmates at school in the West Virginia coalfields, graduating just as the Great Depression began. When Homer asked for her hand, Elsie instead headed to Orlando where she sparked up a relationship with dancing actor Buddy Ebsen. But when Buddy headed for New York, Elsie’s dreams of a life with him were crushed and eventually she found herself back in the coalfields, married to Homer.

Unfulfilled as a miner’s wife, Elsie was reminded of her carefree time with Buddy daily because of his unusual wedding gift; an alligator named Albert, whom she raised in the only bathroom in the house. After three years of marriage, Homer issued Elsie with an ultimatum – ‘it’s either me or the alligator.’ Thus, there was only one thing to do; carry Albert home. To Orlando. A road trip of nearly a thousand miles.

I am delighted that Homer has taken the time to answer my questions about the writing of
Carrying Albert Home..

Hi Homer  and welcome to Jaffareadstoo....


Carrying Albert Home was originally written as a memoir. Why did you decide to turn it into fiction?

I used to tell the story of Albert getting carried home to friends and family, as well as in speeches I gave here and there, so that folks would understand who my mother and father actually were. The way I told it was with some sincerity, as if every part of it was true, and I also told it in a very concise way so I could get to the punch line that everyone found very funny, indeed. The story was so popular that whenever I went to speak, someone would invariably ask me to tell the "Albert" story. When one day I heard a voice in my head (all right, I'll confess it was the voice of my mother long since passed, go figure) telling me to write a book based on my tale, I knew that it was way too big to be a memoir. After all, we story tellers in the American South are forbidden to ever let the truth get in the way of a good story. So I determined not to call it a memoir but instead a "somewhat true story" that's actually all true except the bits that are not and they're true, too! As an author who hangs out in bookstores, I also noticed that the fiction shelves are invariably better lit and better placed than memoirs, which are often placed in dingy corners.


Without giving too much away, what can you tell us about the story?


Carrying Albert Home is simply the story of the eternal love triangle. Homer loves Elsie but Elsie loves Albert. The twist is kind of green and scaly. Albert, you see, is an alligator, a wedding gift to Elsie from her former boyfriend, a fellow named Buddy Ebsen who would go on to become a famous Hollywood actor. Elsie transferred her love for Buddy to Albert and raised him in the bathtub. When her husband sat down to do his business, the playful little alligator crawled out of the tub and stole his pants. That's when Homer started yelling, "It's either me of this alligator, Elsie!" After a few days of thinking it over, Elsie said, "All right. I will let Albert go but we have to carry him home to Florida." This began a madcap, adventurous road trip of over 1000 miles through the American South during the Great Depression with an estranged couple up front and an alligator in the backseat of a 1925 Buick. There's also a rooster but his presence is not entirely understood. Through one misadventure after another, Homer and Elsie begin to understand that destiny is in charge and that Albert is much more than he seems and perhaps the rooster, too. They may well be the agents of love, desperate love, joyful love, kind love, and everlasting love, too.


What do you consider to be the overall theme of Carrying Albert Home?

The story of how Homer and Elsie carried Albert home is their witness and testimony to what is heaven's greatest and perhaps only true gift, that strange and marvellous emotion we inadequately call love.


Yes! When I put all the stories together that had been told to me by my parents about their marvellous journey carrying Albert home, I realized they were sending me a message from beyond the grave, "Never give up on love."


You have had a very successful writing career, who or what have been your major influences?

When I was a child in the West Virginia coalfields, I was terribly near-sighted, a fact not discovered until I was in the 4th grade. This turned out to be a wonderful thing for my future career as a writer since I couldn't see well enough to play outside with the other kids so contented myself with reading anything and everything that resided on my parents' bookshelves. They were both avid readers so I had a lot to choose from and I did. Certainly Huckleberry Finn would become a major influence but also the works of John Steinbeck. Mostly, however, I come from a mountain people who are renown for being good storytellers. I listened to them throughout my young life and learned how to tell a pretty good story, too.


I write every day. I never miss a day. I can't be happy if I'm not writing. We have a loft in our home where I retreat to write. I am often joined by one of our seven cats who, just for fun, will sometime put a paw on my shift key and without realizing it, I end up WRITING EVERYTHING IN CAPS!

I have several ideas batting around in my head but, frankly, it kind of depends on how successful Carrying Albert Home is. If it does as well as predicted, then I will probably write more of these kinds of stories. Another book of mine titled Torpedo Junction has recently been optioned for a motion picture and I've been asked to help write the screenplay so that's liable to keep me busy for a little while.

It's been a real delight to host this stop on the Carrying Albert Home Blog Tour.

Do visit the other stops on the tour.... 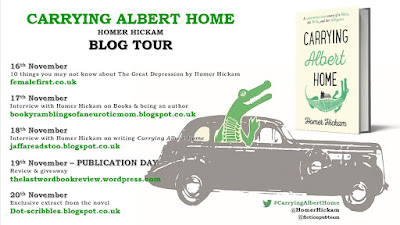